The Ultimate Armor (アルティメットアーマー, Arutimetto Āmā) is a secret armor for Mega Man X that bestows the most all-around fighting power in any of the games in which it appears. Because it appears in so many games in the Mega Man X series, it has the most recurring traits of any of X's armors.

In Mega Man X4, X5, and X6, the Ultimate Armor appears as a modified design of the Fourth Armor, and grants all of the abilities of that same armor, including Air Dash, Hovering, charge Special Weapons, and reduction of damage taken. It has the Plasma Charge Shot of the Fourth Armor (Stock Charge Shot is not available), and its powerful Nova Strike can be performed an unlimited number of times.

Special Weapon energy usage while equipped with the Ultimate Armor varies from game to game: In Mega Man X4, this armor grants unlimited usage of Special Weapons in their normal forms. Weapon Energy will still be used when Charge Shots are used.

However, in Mega Man X5 and X6, the Ultimate Armor will work like the other armors used in their respective games, with the maximum shot capacity of the Special Weapons that X can use automatically increased by 50%.

While not available in the games, the armor can also generate a beam blade from the buster and grants the user the ability to fly, either by using a booster on the back (which appears when using Nova Strike) or using the armor as a board-like transport.

In Mega Man X5, there is a way to receive the Ultimate Armor without using a code. In the third Zero Space stage, there is a vertical shaft that leads to a special armor capsule. In order for this capsule to appear, X must not have any armor equipped. Entering this capsule as normal X will grant him the Ultimate Armor. However, he will only receive an armor program as opposed to equipping the armor right away (the same principle used when gaining the Falcon Armor and the Gaea Armor except that only one program for the Ultimate Armor will be given for all parts and not 4 individual programs). This will make X own a total of 4 armors in the game, including Fourth Armor (if X was chosen as starting character).

The Ultimate Armor may be unlocked through either a code, or by starting a new game from a save file that has been cleared while X is at 100% and all 8 Icarus and Hermes Armor parts are unlocked. Take note that the code option is only available for the console version (PS2) of this game (as well as the later Mega Man X Legacy Collection 2 re-release) and has no effect in its PC Version.

In this game, the Ultimate Armor appears to be a black version of the Neutral Armor, with its own violet glow. It is a separate option within the Neutral Armor selection, and thus cannot mix its parts with either the Hermes or Icarus Armor.

This armor has one uncanny ability that other Ultimate Armors do not have - it grants X unlimited usage of all Special Weapons obtained from the bosses, including charge shots. This is different from what the X4 version.

This version of the Ultimate Armor has a more powerful Nova Strike, at the cost of limiting its use since it now has its own weapon gauge. One use will drain the entire energy gauge, but it also has the quickest recharge rate, refilling the gauge in mere seconds. This version of the Nova Strike is more powerful when X's weapon gauge is augmented via Pallette's chip development. When used on a boss in Normal Mode or higher, most bosses can go down in two hits; one Nova Strike will shave off most of the boss' energy, leaving only a fraction so that that boss can use its Overdrive attack. Also, if used on Sigma before he automatically grabs the character, it will only reduce his health enough to initiate that segment of the fight. The way X performs his Nova Strike in this armor resembles that of the Blade Armor's Mach Dash in X6, covered in powerful destructive energy. Unlike the Mach Dash, however, it can only dash left or right.

Here the Ultimate Armor is X's second Hyper Mode, and is earned by defeating the secret boss Rafflesian.

A stark change in appearance from previous armors in terms of design, but the color-scheme is back to white and blue, with red and yellow detailing. A disc-like object protrudes from his shoulders horizontally behind him. A large, green gem forms his chest, and a targeting display covers his left eye. Gatling batteries are on the front of his shoulders, and his arms change into a pair of large, pistol-like appendages from the elbow down. The legs and the top of the disc are also translucent. X's standard attack becomes a devastating beam attack called the Giga Crash fired from his chest, and his sub weapons are Impact Cannon and Strike Bullet. When equipped, X perpetually hovers in the air (presumably for the armor being too heavy to stand).

X's Action Trigger in this Hyper Mode is still called the Nova Strike, but functions the same as the Final Strike. The higher X's WE is when the move is started, the longer X has to attack enemies.

X uses a white version of the Ultimate Armor in the X Challenge mode.[1][2] It lacks the Nova Strike and has the weaker version of the Plasma Charge Shot from the Fourth Armor in Mega Man X5, leaving one plasma ball behind. Like in X6, X can also use Zero's Z-Saber with this armor. He can also use the Special Weapons from past bosses. When used in a buster-only challenge, the majority of this armor is removed with the exception of the Foot Part.

Additionally, once X Challenge has been completed on Hard difficulty, the player will unlock a secret bonus stage in which the bosses are Ultimate Armor X and Zero's "Awakened" form from X5.

X dons the Ultimate Armor during the end of his finishing move, in which he hits the opponent with the Nova Strike and slams them into the ground.

X will equip his Ultimate Armor during his level 3 hyper combo "Ultimate Strike," in which if the aura that comes from X putting on his armor connects, he hits his opponent with Nova Strike and ends by shooting them with a beam from his X buster.

He also assumes the Ultimate Armor in-story in an attempt to control the sheer power output of the Infinity Buster to destroy Ultron Omega, ultimately succeeding with the help of Doctor Strange and Morrigan channeling the various heroes power into him with themselves as magical conduits.

When X uses his super skill, "Ultimate Nova Strike", he dons the Ultimate Armor and attacks with the Nova Strike.

X appeared with the Ultimate Armor in Dragon Poker and Elemental Story.

Refer to the table below for codes used to gain use of the Ultimate Armor. The codes are listed with the button pressed and the number of times pressed next to it. In Mega Man X4 and X5, highlight X on the Character Select screen and enter the codes. In addition, in X4, the shoulder buttons must be held until the actual game begins (after the cutscenes). In X6 and X8, highlight Game Start, complete the sequence of buttons, and press Start. While there is no way of knowing if the code is completed in X4 until the opening stage is accessed, in X5 and X6 a sound clip is heard if entered correctly, while a voice clip of X is used for X8. 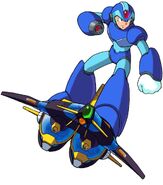 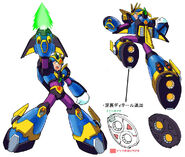 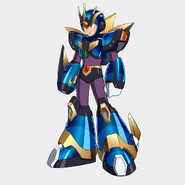 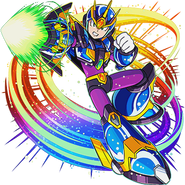 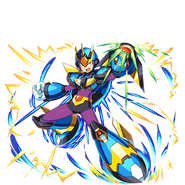 The model of Ultimate Armor X (CM) from Rockman X DiVE without his guns.
Add a photo to this gallery

Mega Man X equipped will all weapons in the Ultimate Armor from Mega Man X4.

Mega Man X equipped will all weapons in the Ultimate Armor from Mega Man X5.

Mega Man X equipped will all weapons in the Ultimate Armor from Mega Man X6.

Mega Man X equipped will all weapons in the Ultimate Armor from X Challenge.

Retrieved from "https://megaman.fandom.com/wiki/Ultimate_Armor?oldid=338743"
Community content is available under CC-BY-SA unless otherwise noted.