Ultron Omega is the final boss of Marvel vs. Capcom: Infinite, a further evolution of Ultron Sigma caused by the side-effects of using the Soul Stone’s full potential without having noble souls of their own (or any soul for that matter), both Ultron and Sigma being mechanical in nature. Similar to Ultron Sigma, they are voiced by Jim Meskimen and Chris Tergliafera, the voice actors for Ultron and Sigma, respectively.

Ultron Omega is a much more literal combination of Sigma and Ultron's bodies than Ultron Sigma. They are now split into two halves, the top being a bulky torso of Ultron connected to the bottom half which resembles a giant Sigma head. Sigma's portion of the body particularly resembles his form from the final battle of Mega Man X4, with wires at the base of the skull and odd lines and deterioration along his face. They also have four massive disembodied hands, two being sharp claws that resemble Ultron's hands and the other two being large fists resembling Sigma's hands from Gamma Sigma in Mega Man X5.

After Ultron Sigma battles the heroes, Dante arrives with the Soul Stone and gives it to him, a seemingly foolish move. However, when Ultron Sigma tries to use the power of the Soul Stone they are thrown back and begin to glow, eventually exploding into a cloud of smoke and emerging as Ultron Omega, an incomplete and monstrous new transformation all according to Dante's plan. Because of Sigma and Ultron's lack of noble souls, or any souls at all, the Soul Stone malfunctioned and turned them into a crazed abomination. This negates the Sigma virus’ immortality. They then captured Dante before he could evade his limbs vowing to "return the favor." Ultron Omega then declared, alongside their new identity, that, being perfect, they cannot be destroyed. However, Captain Marvel calls Spider-Man quickly to proceed intercepting the Soul Stone with his webshot, but Ultron Omega prevents him from retrieving the stone. Ultron Omega then orders his servant, a corrupted Thor, to destroy the heroes. However, Thor, having caught the Soul Stone, is restored to his original self and refused. Thor and X then team up to fight Ultron Omega, and succeed in freeing Dante. Just as this happens, a portal opens up with Doctor Strange, Iron Man, Ryu, Zero, Frank West, and Gamora appearing. Iron Man supplies X with the Infinity Buster, and X inserts the Power Gem to power the cannon. Captain Marvel and Dante then fight Ultron Omega to ward him off while X charges up, and manage to get the mechanical monstrosity to falter. At Iron Man's command, the heroes then supply X with the Time, Mind, and Soul Gems for the Infinity Buster. However, the sheer power of the cannon's charge was enough to have X undergo massive convultions due to having problems controlling it, even in his Ultimate Armor, resulting in Doctor Strange inquiring the heroes to lend him and Morrigan their strength so they can channel it into X so he can focus the Infinity Buster's power enough to end Ultron Omega for good. They do so, and X then manages to aim the buster after using a charged shot to end the menace, with Captain America confirming he had indeed been destroyed when X upon regaining consciousness inquiring of Ultron Omega's status. 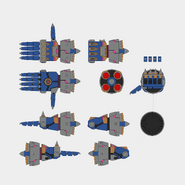 Retrieved from "https://megaman.fandom.com/wiki/Ultron_Omega?oldid=320129"
Community content is available under CC-BY-SA unless otherwise noted.