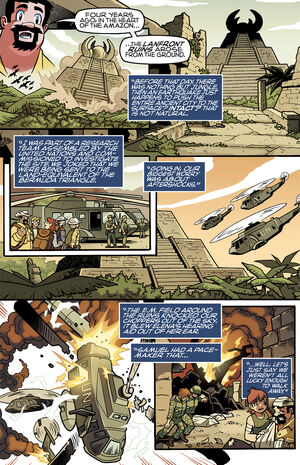 A research team that appeared briefly in a flashback from Pedro Astil in issue 29 from the Mega Man comic book series by Archie Comics.

A research party containing researchers and soldiers was assembled by the United Nations to investigate the Lanfront Ruins when it mysteriously resurfaced in the Amazon after an earthquake. They approached the ruins with three helicopters, but the choppers crashed due to the electromagnetic field in the area, causing injuries and fatalities. Despite his injuries, Pedro Astil led the survivors far enough from the ruins to radio for help.

After their rescue, Pedro was determined to find out what was going on in the ruins as he lost many friends there. He spent three years petitioning to go back to research it, but no one wanted to risk more lives or spend the money. A year later the entire site was set off-limits by the United Nations.

Four years after its appearance, Dr. Wily went to the ruins to discover its secrets, finding Ra Moon, who uses him to increase the power of its electromagnetic field and shutdown all electronic devices from the world. After Ra Moon's destruction a new expedition was made to investigate the ruins, although it is unknown if the United Nations were involved. The party consisted of Dr. Astil, Dr. Light, Dr. Cossack, Plant Man, Mega Man, Roll, Rush, and Pharaoh Man, and they investigate if Dr. Wily's claims about Ra Moon were true, proving that he wasn't responsible for the global blackout.

Retrieved from "https://megaman.fandom.com/wiki/United_Nations_Research_Team?oldid=260791"
Community content is available under CC-BY-SA unless otherwise noted.