Up'n'Down (アップンダウン, Appu n Daun) is a small robot from Mega Man 4 and Mega Man III that was originally used to develop lands for agriculture, sprinkling water as it jumps through the air. They emerge from pits without warning to try to knock Mega Man into the pits when he tries to cross without defeating them. In Mega Man 4, they appear in Dust Man's stage and in the first and fourth areas of Dr. Cossack's Citadel. In Mega Man III, they again appear in Dust Man's stage and in the final stage. 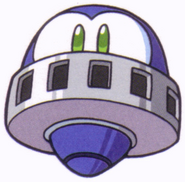 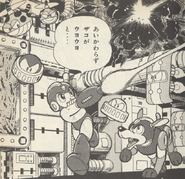 Up'n'Downs in the Rockman 4 manga

An Up'n'Down in Ben Bates' Mega Man picture.
Add a photo to this gallery
Retrieved from "https://megaman.fandom.com/wiki/Up%27n%27Down?oldid=323462"
Community content is available under CC-BY-SA unless otherwise noted.