Uptown, known as Lakeside Park (レイクサイドパーク, Reikusaido Pāku) in Japan, is an area from Kattelox Island in Mega Man Legends located to the west of Downtown.

The Kattelox Hospital (カトルオックス病院, Kattelox Hospital) is a large white building with an injection-like appearance. One of the few patients in the hospital is a girl named Ira, who has a problem on her leg and can't walk. If Mega Man talks with the nurse taking care of her in room 305, she will say that if the hospital had more modern equipment, Ira could be cured. Mega Man than can make a donation of 15000 Zenny to Amelia in City Hall to improve the hospital's equipment. With the new machines, Ira becomes able to walk again. Knowing Mega Man gave the money for the upgrades, Ira gives him the item Flower Pearl as thanks.

In one part of the game, the stomach of Anna, a pregnant woman, will hurt while she is in the Cardon Forest, and Mega Man can bring her to the hospital. Her husband will run to the hospital to see her, and after leaving and returning to the hospital, he will give the item Sun-light for Mega Man as thanks and says he will close the Bronte Vegetable Store for a while to stay with her.

The Kattelox Art Museum (カトルオックス美術館, Kattelox Art Museum) opens when Mega Man helps the curator finish her painting of Uptown's hospital. The museum has two floors, the first floor having an art gallery and the second an exhibition hall. As Mega Man is a Digger, the curator asks him to show her objects he finds underground to be evaluated and put on display. With the new exhibitions, the number of visitants increase, and when all eight exhibitions are present, one of the visitants will give the item Prism Crystal for Mega Man. 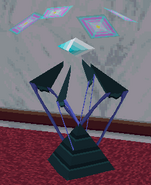 A painting apparently found in a ruin.

A picture of Kattelox Island.

A painting of the woman from the Apple Market bakery done 20 years ago.

A painting of the hospital by the museum's curator. 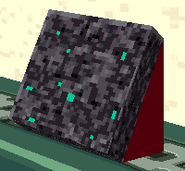 A vase.
Add a photo to this gallery

In the English version of the game YAG was changed to a computer game school, and the girl says she wants to make cool games like Resident Evil.

Wily's Boat is a boat house in Lake Jyun. The Bonne Family stole all boats expect for one that was broken. To reach the Lake Jyun Sub-Gate, Mega Man asks Roll to fix the boat, and Wily allows them to use his boat for free.

Uptown has two residential houses in the area and an entrance to one of the three Sub-Cities.

The museum's second floor.
Add a photo to this gallery

Retrieved from "https://megaman.fandom.com/wiki/Uptown?oldid=198482"
Community content is available under CC-BY-SA unless otherwise noted.