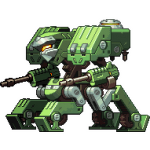 Hey there. I'm an editor on this wiki. I like this series a lot, especially the X and Zero series, so expect me to edit lots of content on this wiki. However, they may be slow, so be patient.

I specialise in calculating in game data form the Zero series, particularly mid-bosses and fortress bosses. Lets not forget the Muto Reploids as well! Also I love the mid-bosses so much, so if there's anything you want me to find out about in this series, let me know.

My favorite characters from the Zero series are Deathtanz Mantisk, Craft, Sol Titanion, Copy X, just about all the Einherjar and Eight Gentle Judges, and X-Kai. I know he's obscure and all, but I just really like him.

Stuff I made in my spare time. Most of these are sprites, and I made them into animations. The characters are mostly from this series, or from a game called Azure Striker Gunvolt, a successor to this series. All animations are made by me, characters from Capcom and Inti Creates.

Note: Be patient. These animations take time to build. Also, these galleries will be expanded from time to time, so expect updates.

Zero, idling. This one was quite tricky, as I has to fit the blinking animation in too.

Colonel, in his combat pose.
Add a photo to this gallery

Burn Dinorex. I used tiles to make this one.

Awakened Zero, idling.
Add a photo to this gallery

Gate, in his Battle Armor.

Nightmare Mother. I had to use separate layers for the sprites, because it was easier tnat way.
Add a photo to this gallery

Harpuia levitating. Like the other animations this is a single image with 19 frames applied.

Hanumachine, in his battle ready pose.

Asura Basura. This one was fun to make. I love this guy.

Rainbow Devil.
Add a photo to this gallery

Omega (Normal Form). This one looks really good, and close to the actual animations, which is why it's one of my favorites.
Add a photo to this gallery

Craft, with his cape on.

Tech Kraken. I wasn't planning on using a floating animation for this guy, but it just looked way nicer that way, so I kept it.

Popla Cockapetri. I actually wanted to add his animation eariler, but I had to fix his frames first, to make it look clean.

Dr. Weil (Ragnarok Core Fusion). Finally, the sick bastard himself. Came out really clean, and just like the real thing,awesome.
Add a photo to this gallery

Protectos. I had to triple (yes, triple) some of the existing frames to make this one.

Hivolt. Again, clunky because I tried to make it look like the real thing.

Prometheus, in his battle ready pose.

Pandora. Unlike other animations, this is a single frame. I just applied a floating animation.

Serpent, in his Model W Fusion. Now this took a really long time to make, about 2-3 weeks. He didn't have as much layers as Nova in his Glaived form, but still very challenging nonetheless. I'll be using this (and his 1st fusion) to update Serpent's boss fight section page someday. (Also PS: Credit to Quick for the base sprite of Serpent in this form.)
Add a photo to this gallery

Rospark, in his flower form. I'll probably post his ulb form later.
Add a photo to this gallery

Character animations I made from the game series Azure Striker Gunvolt. All the sprites (if you want them) can be found here: https://www.spriters-resource.com/3ds/azurestrikergunvolt/?source=genre.

:Merak The Slothful Conjurer. It was a bit hard to get his floating animation down, but after that it became easier.

Jota the Prideful Silhouette. He was without a doubt, the hardest for the lot, with a whopping TWENTY EIGHT frames, he was no joke. Fortunately, his floating animation looks really good.A bit tacky, but still good. Easily one of my best animations.

Carrera the Magnetic Avarice. He was the easiest of the lot, only 6 franes. His animation looks quite smooth though.

Viper the Burning Wrath (edited).Probably the second hardest to make. Only sixteen frames this time. This was the first animation I made actually, so yeah. (I fixed this one by duplicating a few frames and speeding it up)

Stratos the Gluttonous Fly. My favorite member of the Sumeragi Seven. He had 8 frames (I think) but he was no sweat.

Elise the Eternal Envy. Submissive Alter/First Elise. She was easier to do than her dominative alter, but still hard, nontheless.

Elise the Eternal Envy. Crazy Alter/Second Elise. Much easier than the other two, because she only has six frames.

Elise the Eternal Envy. Dominative Alter/Third Elise. As I said, harder than the original.

Copen, the Adept Slayer (hooded). Same as the last one, but with his hood.

Nova Tsukuyomi the Mighty. Not hard because he had looping frames.

Nova Tsukuyomi the Mighty, Glaived. GOOD LORD. He was so much harder than Jota, Merak and Elise because I had to layer everything PERFECTLY. It took almost forever because I kept messing up, but it was really worth it in the end. Best animation I made from the game so far.

Asimov, the true final boss of the game. A little hard, but it came out really good.

Asimov. Same as the last one, but with the lightning effects.
Add a photo to this gallery
Retrieved from "https://megaman.fandom.com/wiki/User:MrJ336?oldid=309301"
Community content is available under CC-BY-SA unless otherwise noted.