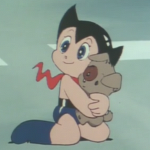 Yo! I'm ProcrastinationStation1963, but you can just call me Kin, or Ryan if you want since that's what most people call me. (I prefer Ryan) My favorite show is Jetter Mars, which I've only found 11 English subbed episodes of. My favorite iteration of Astro Boy is Astro Boy 2003 since that's the version I grew up watching (after that atrocious Astro Boy movie.) I also really enjoy the manga and the 1963 version. I personally dislike the 1980 version the most, not to say it's bad or anything, It's certainly better than the Astro Boy movie. I hope we can become good friends. Oh, another important thing, I'm very strong about my opinions, it's going to be hard to try to change my opinion on something.

If you think you can get along with me, don't be afraid to message me here! I hope we can become good friends! Just know that I have a very strange sense of humor. Nothing vile, just strange.

My history with MegaMan

I've always enjoyed MegaMan since I was a toddler. I discovered him a long time ago via flash games and I thought he was really cool! This was around 2008, so I was really young. I only recently started getting into the MegaMan lore when he was announced for Super Smash Bros. I bought the first 3 games on the 3DS Eshop and played them to completion, I played the rest on an emulator, I must shamefully admit. I really enjoyed it! I have a PS2 with the X collection, so I plan on completing those games too. I played the 1st 3 Zero games and have an understanding of the story for the fourth one. I also played a bit of ZX, plan on buying the game and completing it, only have ZXA for now, though.

Other stuff about me

Retrieved from "https://megaman.fandom.com/wiki/User:ProcrastinationStation1963?oldid=257734"
Community content is available under CC-BY-SA unless otherwise noted.