Utuboros (ウツボロス, Utsuborosu) is a giant moray eel Mechaniloid that appears as the sub-boss of Launch Octopus' stage in Mega Man X and Mega Man Xtreme 2. It comes in and out of the sand, swimming through the room. The player can stand on the middle sections, though the head and tail will cause damage if touched. Destroying either the head or tail section will destroy the Mechaniloid. Its weakness is Boomerang Cutter, but because Utuboros wasn't programmed with an invincibility frame, If timed correctly, X can destroy Utuboros with a single Storm Tornado, so this is the preferred attack. There is also a hidden Utuboros inside a passage that only opens when the Cruiziler is destroyed, leading to a Heart Tank in Mega Man X, and a Body Upgrade in Mega Man Xtreme 2.

This enemy also makes a cameo appearance in the animated intro of the CD ports of Mega Man X3, where X uses it to defeat Launch Octopus.

Amount of shots/hits from weapons it takes to destroy Utuboros. 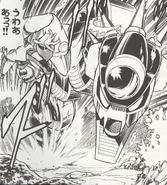 Retrieved from "https://megaman.fandom.com/wiki/Utuboros?oldid=323996"
Community content is available under CC-BY-SA unless otherwise noted.