Vanishing Gungaroo, also known as Vanishing Gungaroon (バニシング・ガンガルン, Banishingu Gangarun) in Japan, is a kangaroo-based Reploid from Mega Man X7 and member of the Red Alert Maverick hunting organization. As can be inferred from X, Zero, and Axl's interactions with the Kangaroo Maverick, Gungaroo's personality is that of a manchild, although he takes offense at his being considered a child.

He begins the boss battle in his signature Ride Armor, and the player must confront him in a Ride Armor battle. Other than its basic attacks of charging punches and jumps, Gungaroo's Ride Armor can create four large close ranged shields to block oncoming attacks. These shields very slowly advance in the player's direction, and are easily avoided. Once Gungaroo's Ride Armor is destroyed, the player can pummel him a little bit more before he destroys theirs. However, as most Ride Armor attacks can miss Gungaroo due to his height, attempting to crush him with a jumping press can be effective.

Gungaroo can be a tricky opponent as he is very quick and constantly dodging. Using his own strategy against him works well; perform hit and run attacks, and keep a good amount of space between him and the character if possible to avoid surprise close ranged attacks. His weaknesses, Wind Cutter and Souenbu, are effective if available. If X is an available character, his fully charged Buster shots can inflict a decent amount of damage, making short work of Gungaroo and his Ride Armor.

Gungaroo appeared in the Worlds Unite crossover as part of Sigma-1's Maverick Army, who launched a massive assault on the Freedom Fighters' Sky Patrol. While they briefly had them and their Robot Master and Maverick Hunter allies on the ropes, the heroes were unexpectedly joined by Sticks the Badger and her new recruits from the world of Street Fighter. Gungaroo was soon engaged by Ryu, who quickly put paid to the marsupial Maverick with his Hadoken. 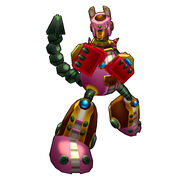 Vanishing in his Ride Armor

Concept art of Gungaroo and his Ride Armor

Retrieved from "https://megaman.fandom.com/wiki/Vanishing_Gungaroo?oldid=300107"
Community content is available under CC-BY-SA unless otherwise noted.