Vanishing Gungaroo (バニシング・ガンガルン, Vanishingu Gangarun, lit. "Vanishing Gungaroon") is one of the Maverick bosses of Mega Man X7. He begins the boss battle in his signature Ride Armor, and you have to fight him in a Ride Armor battle. Once his Ride Armor is gone, you can pummel him a little bit more before he destroys yours, and once you're both on even ground, use Wind Cutter or Souenbu to finish him. 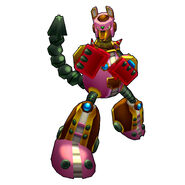 Retrieved from "https://megaman.fandom.com/wiki/Vanishing_Gungaroo?oldid=97146"
Community content is available under CC-BY-SA unless otherwise noted.