In Mega Man X and its remake, Mega Man Maverick Hunter X, X must face Velguarder before confronting Sigma himself in Sigma's hideout. He reappears in Mega Man Xtreme 2, resurrected by Berkana as the first boss of the Laguz Research Laboratory stages.

As Sigma oversaw Velguarder's production, the two share several traits.[4] Similar to Sigma, Velguarder is capable of a triangular jump attack, leaping back and forth between walls. He is also able to fire powerful flames and lightning from his mouth, similar to Wolf Sigma. Velguarder is weak to Shotgun Ice in Mega Man X, and he is weak to both Ray Claw/Rising and Tornado Fang/Drill Crush in Mega Man Xtreme 2.

Velguarder has a short appearance in the Rockman X manga protecting the door to Sigma's throne room, X alluding the watchdog to a Cerberus protecting the gate to hell. X's fight against Velguarder happens off-panel, the next scene showing X carrying Velguarder's head and crushing it with his foot in front of Sigma.

Velguarder also makes an appearance in the Short Circuits panel for issue 39 of the Archie Comics Mega Man series, where Sigma presents Velguarder with the implication that the respective robot dogs for Mega Man and Bass, Rush and Treble, were inferior.

Velguarder in the opening cutscene of Mega Man X5. 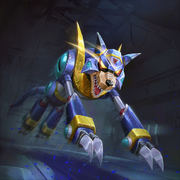 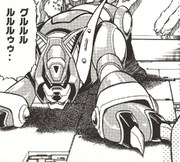 Velguarder in the Rockman X manga.

Velguarder's cameo in the Short Circuit strip from Mega Man #39.