Mega Man X DiVE
ViA (ヴィア, Via) is a mysterious character introduced in Mega Man X DiVE. He used to be the administrator of the Deep Log before the events of his introduction in the game, but no longers performs that task due to reasons as of yet unknown. Because of the program fault ocurring in the Deep Log, his form has changed to closely resemble Zero.

As he appears in the game, ViA shares an almost identical design of Zero as he appeared on the first Mega Man X game, although this is a result of errors in the Deep Log. However, he does distinguish himself by sporting a blue, white and dark-blue armor, not unlike RiCO's; and in contrast with Zero's red armor. Apart from that, a few design details differ from Zero's as well, such as having gems on his shoulders and different markings along his armor. His face is a deep dark blue, and shows no mouth until he sustains heavy damage. His eyes glow yellow with cat-like pupils. The sharp crystal on his helmet is red and his hair is plain white. He also has his own version of the Zero Buster and the Z-Saber, also light-blue themed.

At first, ViA demonstrates a calm but firm demeanor as he quickly dispatches Mega Scorpio to save the player. Shortly after the danger is over, however, he demonstrates a friendly and jovial behavior, poking fun at the Player for depending on RiCO too much and seeming amused at being mistaken for Zero. He is also scolded by iCO for not giving the player enough info on their mission, as well as not informing them of her existence from the very beginning.

Besides the story, ViA appeared as an event boss and as one of the three Monster Hunter Rise collaboration Hunter Programs, named Hunter V (Sinister). 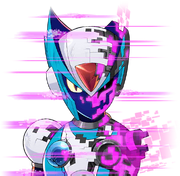 ViA after sustaining heavy damage. 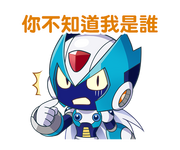 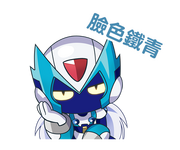 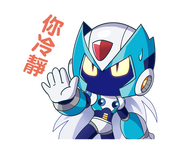 ViA Line sticker 3 "Calm down" 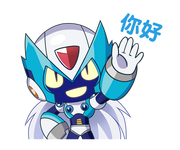