< Vile
View source
watch 02:46
The Quarry - The Loop
Do you like this video?
Play Sound

"I'll make you understand! You will know that I am the one who holds the key to the future!"
―Vile, Mega Man Maverick Hunter X

Vile is an antagonist and playable character in Mega Man Maverick Hunter X. Once a high class Maverick Hunter in the 17th Elite Unit, Vile was imprisoned for his destructive behavior, and later set free from confinement by Sigma to wreak havoc and challenge X.

Because of an irregularity in his central processing core, Vile has developed a strange, almost pathological passion for destruction, hunting down and destroying every Maverick he is sent after with a crazed obsession, no matter what the cost. Due to his behavior, Vile was incarcerated by his superiors on suspicion of actually being a Maverick.[1] Vile chose to side with himself when the rebellion broke loose and has a deep hatred for X that spawned from jealously and confusion due to others believing X is the one who can change the world.

Vile is a very arrogant and violent individual. Though he used to be a member of the Maverick Hunters, he never once considered himself one, being a lone wolf who dislikes the thought of having friends or superiors to help him.[2][3] He also had a habit of not accepting orders from anyone except himself, which often resulted in fierce arguments with his commanders. However, some Hunters still respected Vile for his strength despite his chaotic and hostile demeanor.[4] Even when freed from containment by Sigma, he showed little gratitude and continued to disrespect him, going off to fight X on his own terms again.[5]

Vile is very bitter towards X and devotes his existence to destroying and humiliating him, and proving that he is the stronger of the two. He claims to hate X for his mercy and gentleness, but his grudge may truly stem from jealousy or insecurity, as Vile is confused and frustrated by others' constant appreciation of X.[6] While he claimed he wanted to change the world instead of X, he later admits that he just wanted to outdo X and didn't care about the world.[7][8] His hatred of X was strong enough that after seemingly defeating him in Vile Mode, he proceeded to abuse his rival in various ways, such as repeatedly shooting his downed nemesis on the highway as well as repeatedly kicking and stomping on him, the latter even having him angrily demanding in an insane manner to unveil his true power.[9] Despite his hatred of X, however, he does have a begrudging sense of respect towards X, as he admits that he had indeed grown stronger since their last encounter[10] Zero, on the other hand, has his respect for the most part and Vile acknowledges his formidable strength, though he is confused about why Zero aligns himself with X.[11]

Shortly before Sigma declared war on humanity, Vile was arrested by the Hunters for unknown reasons and seen being taken to a cell in Hunter Base. Zero reasoned that he "must have caused a ruckus again," and it is presumed that Vile disobeyed orders from superior officers and/or threatened the safety of his comrades and innocent bystanders while hunting Mavericks.

Later, while the Maverick Hunters were busy dealing with yet another berserk Mechaniloid, Sigma killed the guards at Vile's cell and released him from prison. He told Vile that he needed someone who could easily go Maverick of their own accord in order to fight X, before leaving him to decide whether or not to join the rebellion. Regardless of Vile's decision, he took the opportunity to flee. X and Zero were called back to Hunter Base to investigate the aftermath of the event, arriving too late.

Vile "joined" Sigma's rebellion and helped attack the Central Highway aboard the Death Rogumer, although he implies that he had no genuine interest in Sigma's rebellion and merely used it as an excuse to torment X. He hardly followed any orders and simply did what he did best: causing havoc and fighting X. At first it seemed X was able to defeat him, but Vile was just tricking him into letting his guard down and used the opportunity to grab him with his Ride Armor. Vile then gloated that he would destroy X and eventually Sigma as well in order to change the world. Zero then came to X's rescue, blasting the arm off Vile's Ride Armor and forcing him to retreat on the Death Rogumer. Vile was irritated by Zero's loyalty and friendship with such a weak B-Class Hunter.

Vile was next seen in the third stage of the Sigma Palace, having already defeated Zero and laying him in a hallway as a bait for X. Once X approached Zero's body, Vile ambushed him in a new Ride Armor and grabbed him. He briefly considered what to do with X, not wanting to help Sigma's plans too much, but this pause gave Zero enough time to recuperate and jump onto the Ride Armor.[12] With his Ride Armor now destroyed by Zero's sacrifice, Vile fought X one-on-one and was defeated. In the last moments before his death, he expressed rage and disbelief that X was able to defeat him.

In the non-canon Vile Mode, Vile took a different path. Instead of joining Sigma's rebellion, Vile decided to prove to Sigma that he was better than X on his own. He attacked X on Central Highway as usual, wounding him enough that Zero simply grabbed X and teleported away instead of risking more damage. Vile was nevertheless frustrated by everyone's insistence on X being special.

Afterwards, Sigma contacted Vile over what he intended to do now that the rebellion was in full swing, but Vile simply tells Sigma to "enjoy the show" as he decides to defeat Sigma's lieutenants as a show of his own strength. Once all eight commanders are defeated, Sigma, amused at Vile's insistence of his own power and superiority compared to X, invites Vile to use his own strength to breach his fortress.

Vile infiltrated the Sigma Palace, running into X and Zero in the third area. The two were well-aware of the chaos Vile had been sowing, but were surprised to learn that Vile wasn't actually working for Sigma. Nonetheless, Vile confirmed only one thing for the pair, that he was an enemy of X. Vile seemed to win the two-on-one battle despite the disadvantage, weakening X and Zero until neither could stand. He then took the opportunity to kick X around the room, gleefully rubbing his face in the dirt and taunting him to show his "true power." Before he can finish X, however, his leg is suddenly grabbed by Zero, who holds Vile long enough for X to fire a Charge Shot at Vile.

An unknown amount of time later, Sigma approaches the injured Vile, and asks Vile what he planned to do once they actually met each other; If Vile would oppose as a Maverick Hunter or serve as a Maverick, making Vile state that he never bothered to think of it and had been merely fighting to surpass X no matter the cost. Unimpressed Sigma ordered his men to come pick Vile up as Vile comes to terms with his actions: by defeating X, he had proved the right of his existence and that's all that mattered. His functions then ceased, leaving him frozen on the floor with his arm outstretched.

While Vile is invincible with his Ride Armor in the original Mega Man X, in Maverick Hunter X he can be harmed and in fact must be defeated in order to complete the Central Highway stage. He only takes damage when shot directly; any hits on the Ride Armor itself are deflected. The Hadoken can't be used against him due to his head being out of range, but a fully charged shot from the Arm Parts obtained from Zero will be lethal.

Vile is encountered in the third Sigma Palace stage, and unlike the original Mega Man X, the Ride Armor battle doesn't repeat as Vile captures X as soon as he appears, with X being freed when Zero destroys the Ride Armor. Despite being angry for Zero's loss, as X isn't defeated by Vile before the actual battle, his health will not recover during the scene. Vile's attacks include some of his weapons from Vile Mode, and also some unique ones such as his dash and laser. He is weak to Rolling Shield.

X: Vile! I should have known you'd be involved in Sigma's rebellion!

Vile: Rebellion? Ha ha ha ha... I don't know what you're talking about!

Vile: I'm just here to cause trouble for you! I hate you!

(X tries to approach Zero's body, but is captured by Vile's Ride Armor.)

Vile: Hm... I guess my destroying you here is all part of Sigma's plan. I don't usually like following other people's plans.

(Zero gets up and grabs onto the Ride Armor.)

Vile: Wha-!? Zero! You're harder to destroy than I thought!

Zero: X! There's nothing more you can do. It's over!

(Zero sacrifices himself in order to destroy the Ride Armor)

X: Vile! What are you doing here?


X: You've been drawn into Sigma's rebellion as well?


Vile: Rebellion? I couldn't care less! I just hate you! That's all!

Vile: Yeah? I was just taking care of a few loose ends.

X: So you're not on Sigma's side? You two aren't friends?

D-Arts line released an action figure of Vile from Maverick Hunter X. The figure include a glass of , a reference to the manga Rockman X by Yoshihiro Iwamoto, who also drew the promotional images for D-Art Vile. It also feature an extra cannon that is able to be attached to the left side of his backpack as an original design made for the figure. 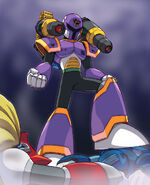 D-Arts Vile with a glass of Bourbon. 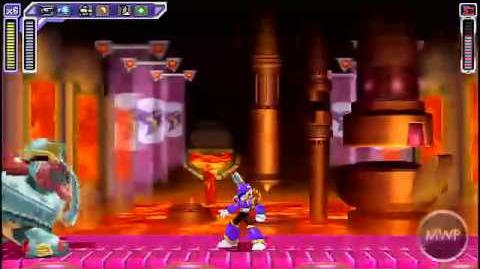