Vile MK-II, known as VAVA MK-II in Japan, is Vile resurrected and upgraded by Dr. Doppler in Mega Man X3. While more powerful, the only thing Vile could think of was to get revenge on X, who had previously defeated him. Instead of assisting Doppler, he left to follow his own agenda.

Vile MK-II usually appears as the boss of Doppler Stage B, but he can be fought earlier as an optional secret boss in his own stage, which can be accessed from the stages of Blizzard Buffalo, Crush Crawfish, and Volt Catfish. In both appearances Vile starts with a Ride Armor. In Vile's stage he uses the Ride Armor type DRA-00 (Kangaroo), while in Doppler Stage B he uses the larger Ride Armor Goliath (Brown Bear in Japan).

Vile's stage is an abandoned factory he set up to self-destruct and tried to hinder X from escaping by fighting him. If he is defeated with any of his weaknesses (Spinning Blade and Ray Splasher), Vile will not appear in Doppler Stage B (replaced by Volt Kurageil), and X will be able to obtain Zero's saber in the battle against Mosquitus. If X didn't use Vile's weaknesses on him, he will flee the scene and reappear at Doppler Stage B as usual. Regardless of the result, X will need to escape from the factory before it explodes.

Vile returns as a villain, once again upgraded to Vile MK-2, in the sequel. Similar to the Rockman X3 manga, Vile often mentions he has a "demon" inside of him, and claims that X also has one.

Vile MK-2 first appears in Chapter 7 "Going Commando" where he taunts X and Zero about Sigma and the remnants of his army. X expresses shock at his return, saying he died in the last battle, and he is shaken about a "demon" inside him. He is defeated and leaves Cyberspace. He shows up in Chapter 14 "Renaissance of Fate" where he is a customer of Sylphie, having gotten his Ride Armor Goliath back and ready for action, much to the dismay of X, Zero, and their allies. After his Goliath is destroyed, he's unfazed, but when beaten again, he retreats.

Following his World R:2 exploits for the time being, he returns to the tower of Tarqaron with some Mavericks in tow with Sylphie's help in Chapter 22 "The Demons Within". He aids M. Bison in keeping Yuri and their allies busy, but Sylphie betrays Bison and Vile by revealing the Balrog has returned, despite having a hand in destroying it the last time Ouma caused trouble. When Estelle is freed from her Psycho Power brainwashing, Vile is ordered by Bison to come down and help due to some Mavericks and Aragami being killed, which Vile agrees to, but knows someone else is coming. Sure enough, Zagi has returned from beyond the grave and is excited to see Yuri again, much to his enemy's disgust. Vile is interested in seeing Zagi having a "demon", but the assassin says he doesn't know what he's talking about, because he kills cause he wants to. Vile points out that's exactly what he means, since it's tormenting the enemy until they're finally dead for good, which Zagi realizes all this time and agrees, to Yuri's annoyance. Despite X telling him to leave Yuri, Flynn, and Estelle alone, Vile tells him that Zagi has his own enemy to fight, since that's revenge justice. Despite some later help from the servants of the Adephagos which Zagi's blastia draws in, they are defeated and take their leave.

In Chapter 27, "A Summation of Malice", Vile separated from Zagi and shows up to get his Goliath, which was repaired by Sylphie again. After some Maverick minions, Kurohagane and Nakatomi ninjas are defeated fighting Shinra, Dokumezu and some Ouma grunts, and Ranmaru show up and do their fighting, Vile accumulates a large amount of AIDA, with a combination of the gold chains, and some energy from Sylphie's shop (Thus, taking advantage of her kindness) to revive Sigma. Despite the Maverick leader thanking Vile for reviving him, Vile thinks nothing of it and says that bringing misery and death to X and Zero will do just fine. Despite this, Vile is defeated in his Goliath again, but retreats again before the Ride Armor is destroyed. Following these events, he introduces Zagi to his boss, who, predictably, in Chapter 30 "Way Beyond Good and Evil", doesn't like working with him since he just wants to fight his enemy (Yuri) without the task at hand (the Golden Seed). Vile laters shows up in Ylisse, (And is mentioned to be mistaken for an armored knight, when in reality, he's a Reploid) to screw around with Tiki in Chapter 35 "Justice Enforced" with Zagi, Kamuz, and Juri. When the good guys show up to reclaim the Golden Seed and save Tiki, Vile brings in some of Sigma's Mavericks along with Kurohagane and some Nakatomi ninjas to stop them. He is beaten with and without his Goliath once again, and retreats.

In Chapter 41 "The 101 Embryo Project" he shows up in his Goliath with Zagi and Adephagos minions one last time on the Centipex to watch the worlds change through Ouma's plans while killing X. Despite a threat warning from Shtrom, Vile tells the Scumocide follower and leader of his kin it doesn't matter since he's only after X. After a grueling fight on Ouma's turf, Vile is killed again, and reminds X that his "demon" will destroy him, with or without his help, but X will stop this demon if it's really there.

Unlike the other villains who reappeared in the first game and returned for the sequel, he has entirely different specials. They are Shoulder Cannon and Flames of Revenge.

Vile MK-II is a Hunter Program in Mega Man X DiVE. His Active Skills are Goliath and Flame Round.

Bandai has released several miniatures of Vile MK-II in different toylines, including: 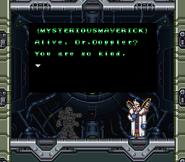 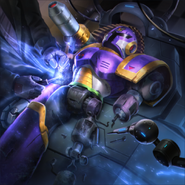 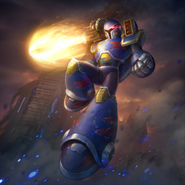