MMKB
Register
Don't have an account?
Sign In
Advertisement
in: Articles in need of expansion, Mega Man X characters, Reploids,
and 9 more

Violen (バイオレン, Baioren) is one of the X-Hunters from Mega Man X2. He and his fellow X-Hunters fight to avenge Sigma and resurrect Zero as a Maverick under their control.

Violen is a stocky Reploid with primarily red armor and a pig-like face. He possesses spiked armor around his wrists, knuckles, shoulders, and neck. Like the other X-Hunters, his feet spike upwards at the tips. His most notable trait is the "hair" protruding from the back of his head, which is composed of metal spike balls ending in one giant flail. He is sometimes seen wearing an orange cape with a raised collar.

Violen is a tough and cocky individual. Possibly due to his design focusing so much on power, his thinking circuitry is incomplete. Not an intellectual in any sense of the word, his rowdy and aggressive behaviors characterize him as the brute force of the organization.

Nothing is known of Violen's past. He is one of three X-Hunters, an elite squadron of Mavericks who took over Sigma's rebellion in his absence. The rebellion laid low at first, quietly analyzing X and the Maverick Hunters while researching and repairing the parts of Zero recovered from the last battle. However, without Zero's control chip they could not fully resurrect him.

Six months after Sigma's defeat, the Maverick Hunters raid an old factory that is mass-producing weapons and Mechaniloids for the Maverick army. The X-Hunters watch the attack from afar in their Arctic fortress, affirming that they will not underestimate X.

After X destroys two of the eight Mavericks, Violen and the X-Hunters grow anxious. They challenge X to a series of duels, using the rebuilt parts of Zero's body as bait. Violen is the third and final X-Hunter to stop awaiting X's arrival among the stages, but if X defeats him before he leaves, he will relinquish one third of Zero's body - his upper body - before retreating.

Violen later reappears as the boss of X-Hunter Stage 1 to challenge X again. X defeats him, and Violen explodes in utter disbelief.

When encountered in a hidden room, Violen attacks with his flail and wrist cannons. His flail has two possible patterns: the first one has him swing his head wildly as the flail bounces like a pendulum. The second one has him swing his head slower, sending the flail directly at the player and then letting it bounce back and forth for a while. These patterns can be difficult to predict, and combined with the flail's high damage and defense against the player's attacks, makes for a dangerous attack. His weakness is Bubble Splash, and Charged Shots or Sonic Slicer are also decent alternatives.

Violen appears as the boss of X-Hunter Stage 1, but without an alternate battle form unlike his comrades. Instead, he has a slightly different strategy as Neo Violen (ネオバイオレン, Neo Violen). His room features small floating blocks, whose locations Violen can randomize at will; these blocks are both a blessing and a curse, as they can create safe spots for the player but also randomize the pattern of Violen's flail. This isn't helped by the fact that Violen uses his flail much more often than bullets in this battle.

* Applies to both encounters.

Violen appeared in the manga.

Violen and his comrades appeared in Worlds Unite as members of Sigma-2's Maverick army, recreated to travel through the Genesis Portals and plant Unity Engines on various worlds so that Sigma could absorb their power. He and his fellow X-Hunters ended up on the world of Monster Hunter, where they briefly deceived some of the inhabitants before being exposed by X and Sticks the Badger, who proceeded to destroy them with help from the locals. 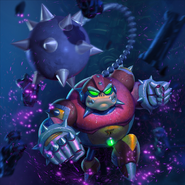