Virgo (ヴァルゴ, Varugo) is an insane and cruel female water-like FM-ian from Mega Man Star Force 3. She is Queen Tia's Wizard, and the two can EM Wave Change to form Queen Virgo. Like other FM-ians she is named after a constellation, Virgo.

Virgo and Corvus are wanted criminals on Planet FM, who have escaped to Earth and pose as Wizards of Queen Tia and Jack respectively. They are intent on using Meteor G's power to destroy the Earth, and in the Meteor Server they turn against their former partners when Geo Stelar talks them out of taking revenge. Before they could kill their former partners, Rogue intervenes and deletes them. 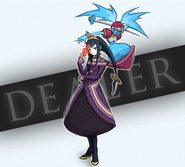 Virgo in the manga.
Add a photo to this gallery
Retrieved from "https://megaman.fandom.com/wiki/Virgo_(FM-ian)?oldid=292297"
Community content is available under CC-BY-SA unless otherwise noted.