The Visualizer (ビジライザー, Visualizer) is a pair of glasses from the Mega Man Star Force series that allows the wearer to see EM Waves. Geo Stelar and some AMAKEN people like the Legendary Master Shin wear Visualizers. In the games and anime, a Visualizer once belonged to Geo's father and was given to him by Aaron Boreal after his disappearance. Geo uses it to find wave holes and other ways to get past obstacles in the games, and whilst using these he can communicate with nearby Mr. Hertzes and NetNavis.

In the Mega Man Star Force anime, the Visualizer technology is also used in the development of the Star Carrier, which allows users of the Star Carrier to see EM Waves, and consequentially, any EM beings and viruses. This has been proven handy when used in conjunction with one of the virus deletion tools employed by the Satella Police.

In Mega Man Star Force 3, the Visualizer experiences a slight change. In previous games, the Visualizer allowed the user to see both humans and EM beings, but in the third game humans can't be seen when they are used. While wearing the Visualizer, the player can tell a human is in a certain area by a circular shadow where the human would have been if visible. 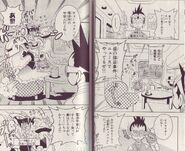 Geo using the Visualizer in Rockman the Shooting Star. 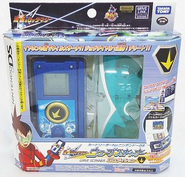