Vogue, known as Mode (モード, Mōdo) in Japan, is the Wizard of Luna Platz in Mega Man Star Force 3. Vogue's appearance is that of a small, green rabbit, suiting Luna's love for cute things. According to Luna's Hunter-VG, Vogue helps her find trendy shopping spots to go to so that she can continue looking fabulous. She also has state-of-the-art memory capabilities. Vogue is not a battle Wizard, as she clearly states that she finds it terrifying.

Vogue makes her first appearance during the WBG Studios scenario. Before they board the bus to arrive at the studio, Luna introduces Bud Bison, Zack Temple, and Geo Stelar to her.

Vogue also appears in the credits along with everyone else and their Wizards at Luna's party. 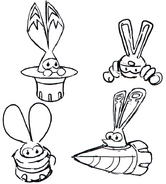 Early designs
Add a photo to this gallery

Retrieved from "https://megaman.fandom.com/wiki/Vogue?oldid=292296"
Community content is available under CC-BY-SA unless otherwise noted.