Volteel Biblio is a member of the Eight Gentle Judges who was brainwashed by Dr. Weil as one of the "Weil Numbers". He is the Left Thunder Judge (左雷審官, Sarai Shinkan)[1]. He has an eccentric personality, and as to maintain his compressed form, he removed the protection of his power generator. However, the electromagnetic waves emitted by the generator caused damage to his brain as a consequence, requiring Biblio to have regular maintenance to avoid defects. When Zero goes to the flooded ruins of an ancient library to search for Secret Disks about Weil, Omega, Dark Elf, and the Elf Wars, Biblio appears and fights against him to protect the data. They later fight again, with Zero emerging victorious, causing the Weil Number to remark that Zero is crazy and boasts that he can't break Omega, hinting at the Devil Reploid's power in three stages...

Biblio also makes a cameo in Mega Man Zero 4 as one of Dr. Weil's first form attacks, where an image of him appears and electrifies the floor with his Electric Cage attack.

Volteel Biblio attacks by releasing electric spheres from his tail, while hiding in holes. He will sometimes exit the holes to charge the entire room with electricity/attack with his tail and will also stretch out his two tails to attack. If the player has rank A or S, Biblio will use V Laser, in which he shoots two electric beams from his tail. Defeating him gives Zero the "Shadow Dash" Foot Chip and, if at A or S rank, the V-Shot EX Skill.

The EX Skill Blizzard Arrow is extremely useful against him (if the player has obtained it) as it can strike him multiple times, making short work of him. 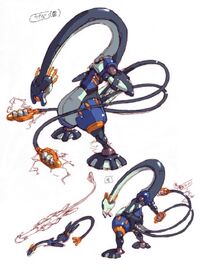 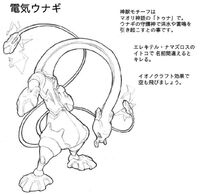 Early Zero series boss concept art, which appears to be the basis for Volteel's design.
Add a photo to this gallery

Retrieved from "https://megaman.fandom.com/wiki/Volteel_Biblio?oldid=356640"
Community content is available under CC-BY-SA unless otherwise noted.