In the year 22XX, NAZA is an Electopia space exploration agency (ニホンうちゅうかがくきょく "Nihon Space Science Station") with an aim to create a BrotherBand with life forms beyond Earth. 3 years before the first Mega Man Star Force, they launched a space station called Peace, known as Kizuna in Japan (きずな Kizuna "Bonds"). It stationed multiple astronauts, one of them being Kelvin Stelar. However an incident occurred (Planet FM took the astronauts hostage) that made the space station disappear from their radar. After a few months, they could only find a section of the station with none of the astronauts. Due to the Peace disaster, NAZA halted all plans on the project.

In the time since then until Star Force 3, the administration had converted its name to WAZA and has many branches in different countries. In Star Force 3, they are shown cooperating with the Satella Police. The Electopia base is called the National WAZA HQ, known as WAXA Nihon Branch (WAXAニホンしぶ) in Japan. However, during the events of Star Force 3, all of WAZA's main headquarters outside of Electopia were destroyed by Meteor G. 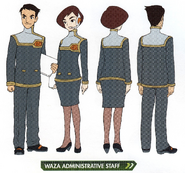