WackoMan.EXE known as ColoredMan.EXE (カラードマン, Karādoman) in Japan, is a character in the MegaMan NT Warrior anime series. He is the NetNavi of Maddy, and the two are agents of World Three. After the fall of the crime syndicate however, WackoMan and his fellow WWW Navis and their operators slowly become more friendly to their former enemies Lan Hikari and MegaMan.EXE, eventually becoming more like allies to them.

WackoMan is one of several characters to receive a name change different from his video game incarnation when the anime was dubbed, as he is known as ColorMan in the games.

WackoMan, true to his name, is a goofy character, and rarely takes things too seriously. He is childish and often taunts and laughs at his opponents and makes fun of them. However this is deceptive; WackoMan is a formidable opponent in his own right and his eccentric behavior often throws his enemies off, though if he loses the upper hand he quickly becomes cowardly.

Like the other World Three Navis and their operators, WackoMan was a staunch member of the criminal organization. However after teaming up with Lan and his friends during the Grave incident, WackoMan and is allies quickly become more friendly towards their former enemies.

WackoMan is the least recurring NetNavi of the World Three. Despite his operator And all other World Three members making several appearances throughout the series, WackoMan does not appear after Stream. 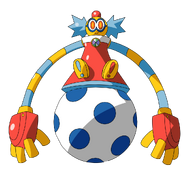