Walking Bomb (ウォーキングボム, Wōkingu Bomu) is an enemy in Mega Man 3 that looks like a walking hand grenade. It is a highly modified version of the Killer Bomb that are now able to walk and jump obstacles, but can no longer fly. They only take one shot to kill, but they explode after they are shot, so the player has to keep a decent amount of distance to avoid the explosion. They appear in Shadow Man's stage in Mega Man 3 and Mega Man III.

Walking Bombs have a short appearance in the Rockman World 3 manga and the Rockman 4 manga, appearing alongside a Potton, Shadow Man, Snake Man, and Hard Man. 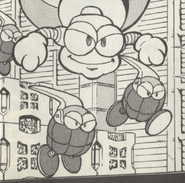 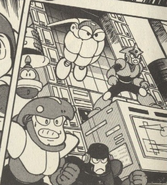 A Walking Bomb in the Rockman 4 manga.
Add a photo to this gallery

Retrieved from "https://megaman.fandom.com/wiki/Walking_Bomb?oldid=340546"
Community content is available under CC-BY-SA unless otherwise noted.