Wall Blaster (ウォールブラスター, Wōru Burasutā) is a wall-mounted cannon enemy that appears in Ring Man's stage in Mega Man 4 and Mega Man IV. Wall Blaster can aim in seven directions and shoots 3 shots at a time.

Amount of shots/hits from Special Weapons it takes to destroy a Wall Blaster.

Wall Blaster II is an improved version of Wall Blaster that appears in Mega Man 6. It is waterproofed so it can also be set underwater, but now it is slower and can shoot only in three directions. It appears in the stages of Flame Man, Centaur Man, Mr. X Stages 1 and 4, and Wily Stage 3. It shoots two bullets at a time. 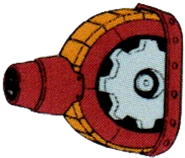