Wall Kick (壁蹴り, Kabe Geri), also known as "Triangle Kick" (三角蹴り, Sankaku Geri), Wall Climb and Wall Jump, is an ability that allows the player's character to reach higher places that usually can't be reached with a normal jump, to move down slower and safely see what is below, or quickly climb to escape a danger. By holding the directional button in the same direction as the wall while in the air, the character will do a Wall Slide (壁はりつき, Kabe Haritsuki, "Wall Sticking"), holding the wall and sliding it down to decrease falling speed. Pressing the jump button while touching the wall will make the character kick it to elevate himself, and can climb walls by kicking it multiple times. Characters can also Wall Kick and Dash at the same time to perform a Dash Wall Kick (ダッシュ壁蹴り, Dash Wall Kick), the character jumping away from the wall farther with increased speed.

In the Mega Man franchise, Wall Kick first appeared in Mega Man X, near all playable characters from the Mega Man X series onward are able to use Wall Kick, including X, Zero, Axl, Vile, and Biometal users. This way, the characters will be able to "bounce" on the wall and reach higher places or other platforms. The Foot Parts from Mega Man X also allow X to break certain blocks with a Wall Kick.

Some characters from the original Mega Man series (Cut Man in Mega Man Powered Up, all playable characters from Mega Man: The Power Battle and Mega Man 2: The Power Fighters, and Mega Man in the Super Smash Bros. series) have a simplified version of this move that allows them to jump from a wall only once, limiting the height they can reach, but they can still reach higher areas by jumping between two walls. Buckfire the Gaxelleroid also has a limited wall jump, named Canyon Jump. They are all unable to slide down walls. Vulturon the Condoroid is able to Wall Grab, using his claws to hold on walls without sliding.

Besides playable characters, Wall Kick is also used by some bosses, like Slash Man, Flame Stag, and Sigma for example.

Frog (フロッグ, Frog) is an equippable item that slows down the speed the wearer slides down a wall. This helps the wearer by giving more time to analyze the area and plan the next move, make more precise jumps, and avoid attacks and hazards. This ability is also granted by frog-type animal Cyber-elves in the Mega Man Zero series. The Cyber-elves and items do not stack when both are used.

"Iceless jump" is a nickname given by players to an advanced wall jump technique that can be performed in the first three Mega Man X games. It allows X to jump farther than usually possible by dash jumping in a wall than jumping from the wall without touching it, allowing him to reach items that would otherwise require Special Weapons or Armor Parts.

In the Rockman X manga by Iwamoto Yoshihiro, it is stated that only Special-A Rank Maverick Hunters are able to do the Triangular Kick. When performing this move, a booster in X's back helps in his jumps.

This move is also seen being used by X in the Mega Man comic and by Raigyan β in Irregular Hunter Rockman X.

In Rockman X7 4Koma Manga Kingdom, Wind Crowrang rubbed walls to make them slippery like glass in order to make the Hunters unable to use the move. 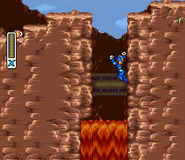 X kicking a wall to escape the rising lava. 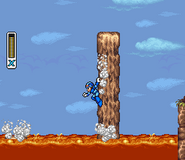 X sliding down a collapsing wall. 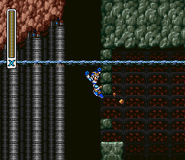 X breaking a block with the First Armor's Foot Parts.

Zero sliding down a wall.

Zero dash jumping from a wall.

Zero attacking while sliding a wall.

The Iciest Iceless Jump
"Iceless jump" in Mega Man X3
Add a photo to this gallery
Retrieved from "https://megaman.fandom.com/wiki/Wall_Kick?oldid=309379"
Community content is available under CC-BY-SA unless otherwise noted.