Watcher (ウォッチャー, Wocchā) is an enemy from the first Mega Man game and Mega Man Powered Up. Watcher is a reconnaissance robot that passes by the screen and shoots off two electric beams from its eyes when an enemy is in front of it. It appears in groups of six in Elec Man's stage and Wily Stage 4.

A reconnaissance robot. It attacks intruders with its lasers.

A Watcher made a cameo appearance in Captain N: The Game Master episode "Videolympics".

A Watcher makes an appearance on the Variant Cover of Mega Man #40.

Watcher appeared in the Rockman manga. 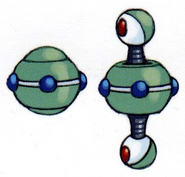 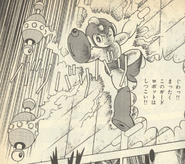 Watcher in the Rockman manga
Add a photo to this gallery
Retrieved from "https://megaman.fandom.com/wiki/Watcher?oldid=301783"
Community content is available under CC-BY-SA unless otherwise noted.