Water Wave (ウォーターウェーブ, Wōtā Wēbu) is Wave Man's Special Weapon in the Mega Man series. The weapon uses high pressure to inject compressed water in one direction with enough power to pierce through steel.[1] When used by Mega Man, he sends out three water spouts as a small wave across the floor that can absorb some enemy projectiles. The waves can only be fired when Mega Man is in contact with the ground. It will stop when it hits an enemy that is strong enough to sustain the hit, or until it hits a wall. It cannot be activated while Mega Man is in the air or on a levitating platform. It also can't be activated if Mega Man is at the very end of a ledge. However, it can be activated on a ledge provided it has time to flow off the edge where it will fall to the ground, and continue to travel until it hits something in its path.

Mega Man used Water Wave in the episode 20,000 Leaks under the Sea of the Mega Man animated series. Used exclusively underwater, it takes the form of a churning funnel of water which is able to deflect enemies and some projectile attacks.

In the Worlds Collide crossover, Wave Man attempted to use Water Wave on Sonic the Hedgehog, but Sonic avoided the attack with his speed.

Wave Man's Water Wave forces highly pressurized water into the ground, which travels through underground channels, pipes, and sewer lines to erupt elsewhere as a pillar of rushing water. This attack is based on Pascal's Law, which states that when pressure is applied to a contained liquid, its volume remains uncompressed while the pressure is conveyed undiminished throughout the liquid and to the surface of its container.[2] When the Fifth Numbers attack together, Wave Man is the second to attack, using Water Wave to push the target to Crystal Man.

Water Wave appeared in the Rockman 5 manga and in Rockman 4Koma Dai Koushin. 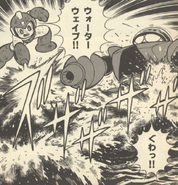 Water Wave in the Rockman 5 manga.
Add a photo to this gallery

Retrieved from "https://megaman.fandom.com/wiki/Water_Wave?oldid=274832"
Community content is available under CC-BY-SA unless otherwise noted.