"Stay away from me!!"
—Wave Man, Mega Man & Bass database

Wave Man (ウェーブマン, Wēbuman) is an amphibious combat Robot Master created by Dr. Wily to invade and take control of the water quality administration in Mega Man 5.[1] Armed with his Special Weapon, the Water Wave, Wave Man attacks by producing pressurized columns of water which burst from the ground towards his opponents' positions. His offensive capabilities are augmented by the ability to launch razor-sharp Harpoons from the cannon on his right arm, but since these main means of attack are ranged, he tends to be more vulnerable when fought in close quarters. Unlike his predecessor Bubble Man however, Wave Man has good mobility, both on land and when submerged in water.

Wave Man is known for being highly emotional and easily moved to tears. He is also prone to fits of anger, during which he will fire his Harpoons around violently until his rage subsides. Overall, he is an anti-social robot who is not easily approachable, and would sooner take a walk by himself at the bottom of the ocean than engage other robots in conversation. Wave Man also hates pollution, particularly sludge, which only serves to fuel his temper even more.

Wave Man is one of the eight bosses. His attack pattern is using Water Wave to create a water pillar, firing a harpoon and then jumping towards Mega Man. The water pillar also acts as a shield, deflecting shots when struck. To avoid the pattern, the player must stay out of the way of the water pillar and jump fast over the harpoon to make it miss, and slide to the side Mega Man has more space to make Wave Man miss his jump. Afterwards, he will be vulnerable for a short time to attacks.

Alternately, sliding rapidly to one side of the room and jumping over the harpoon will cause Wave Man to create a waterspout under himself or directly in front of the player (when extended, the buster on the sprite protrudes through it, although no contact damage is dealt), allowing him to be attacked.  Jumping just before he fires his next harpoon and sliding rapidly to the other side of the room repeats the pattern, although sometimes the Water Wave may rise directly under the player if they do not slide fast enough.

Wave Man is weak to Charge Man's Charge Kick, and it can be used to go through the harpoons, but not through his Water Wave. Wave Man can be destroyed with seven hits from Charge Kick.

Wave Man appears as a boss in the final stages.

Mega Man Legacy Collection text: A robot made to control sources of drinking water. It's tough to dodge his jump attack after avoiding a water column.

Enemies in Wave Man's stage, a water quality management station. One area contains floating bubbles that Mega Man must use to reach the top, and near the end of the stage he drives a Marine Bike.

Wave Man appeared in the episode "20,000 Leaks under the Sea" from the Mega Man animated series. Other than the blue parts of his armor being a lighter color, there were few modifications to him. He is almost completely unheard (save for one impact grunt), but he was shown to have a destructive mentality, caring little about who was in his way to his goals.

Wave Man appears in Mega Man: Fully Charged as one of the many Robot Masters fought by Mega Man.

This version of Wave Man is slim and has two oxygen tanks attached to his back. The middle point of his trident-shaped crown is taller as well. In addition, Wave Man's harpoon is able to split apart like a claw when shot out, being used as a hook. Also, Wave Man's face is entirely concealed by his helmet and visor, leaving only his eyes visible.

Wave Man is a sewer cleaner and is obsessed with cleaning, ending up flooding the city to make it clean.

The Mega Man 5 bosses have short appearances fighting against Mega Man or helping Wily in the three episodes from the OVA Mega Man: Upon a Star.

Through Wave Man was mainly constructed with underwater combat in mind, he was given additional features and equipment that would allow him to be just as effective when fighting out of water. His Water Wave forces highly pressurized water into the ground, which travels through underground channels, pipes, and sewer lines to erupt elsewhere as a pillar of rushing water. This attack is based on Pascal's Law, which states that when pressure is applied to a contained liquid, its volume remains uncompressed while the pressure is conveyed undiminished throughout the liquid and to the surface of its container.

Wave Man first appeared in the story "Holiday of Soldiers", where the eight Robot Masters from Mega Man 5 have part-time jobs in an amusement park to earn money for Dr. Wily. The eight are a team self-titled "THE HOURLY PAY SQUAD: PART-TIMERS!!!". Wave Man works as the head cleaner of the park.

In Mega Man Gigamix, Wave Man has a brief cameo in volume 1 where he, Charge Man and Crystal Man pedal Napalm Man's vehicle, being seen when Auto open up the Patriot Bomber looking for parts. In other volumes, Wave Man assists Mega Man and the other robots in the battle against the Stardroids.

Dive Man debuted in Archie Comics' Mega Man series during the Worlds Collide crossover with Archie's Sonic the Hedgehog. Along with the majority of the Robot Masters from the classic games, he appeared as part of a massive Robot Master army. 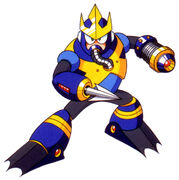 Front, side, and back view of Wave Man.

Wave Man in Mega Man: Upon a Star.

Wave Man in the Rockman 5 manga.

Retrieved from "https://megaman.fandom.com/wiki/Wave_Man?oldid=349241"
Community content is available under CC-BY-SA unless otherwise noted.