The Weapons Factory Stage begins with a short elevator segment, followed by a wide-open area full of conveyor belts. Going down through the conveyor belts leads to Shurikein's mid-boss room. Afterwards, the stage goes outdoors to an industrial district with warehouses and buildings to climb across, including an underground area where the Ride Armor is held. There is then a long stretch of road where one of Gravity Beetle's airships will appear for cargo loading, and its Carry Arms must be destroyed to progress. Next is another indoor segment with falling cargo boxes before Blast Hornet's boss arena.

Several docked Spycopters can be seen in the background during the interior portions of the stage, including the boss room.

The Aerial Battleship on Laguz Island is very different from the Weapons Factory, appearing as part of Zero Mission. It begins in a tower, which leads to a platforming section across Spycopters in the sky. Next is the titular battleship, which the Hunters fight across before infiltrating the interior to battle the Core and then Blast Hornet. 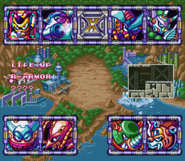 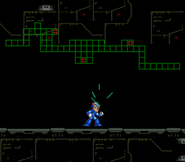