Guerrilla Commander of the Jungle

"You've labeled us all as Mavericks! I won't let you pass. Turn back now!"
―Web Spider, Mega Man X4

Web Spider, known as Web Spidus (ウェブ・スパイダス, Web Spidus) in Japan, is a spider-based Reploid who works for Repliforce as the commander of their guerrilla unit. Before his military career with Repliforce, he was once a Maverick Hunter, belonging to the 0th Special Unit. When Repliforce began their war for independence and was considered a Maverick group, he remained loyal and was stationed in the jungle, charged with guarding a powerful beam cannon hidden there.

Web Spider can move quite fast when ascending on the tree and move in its crown.

With X, Web Spider's weakness is the Twin Slasher obtained from Slash Beast; it can cut his web, causing him to fall and resulting in heavy damage. As for Zero, Ryuenjin can be hard to use on Web Spider, so use the regular saber. Shippuuga is also effective on him, but he needs to be in the right place for it to hit him as well as to avoid take damage on contact, which requires Zero to use his jumping saber slashes mostly.

Web Spider appeared as an unit card in TEPPEN.

Web Spider: You've labeled us all as Mavericks! I won't let you pass. Turn back now!

Zero: Spider! You work for Repliforce?!

Web Spider: No. I know where my loyalties lie.

Web Spider appears in the Rockman X4 manga where he is the first member of the Repliforce fought by X. Spider used to be a Maverick Hunter before transferring to Repliforce, and just like in the game, he is stationed in the jungle guarding Repliforce's giant beam cannon weapon. However, he is planning on using it to burn down a nearby city and kill the humans residing there, and he ruthlessly slaughters a group of Maverick Hunters who went to investigate the weapon in the Kagikira Forest. X shows up to look for the missing investigation team that Spider slaughtered, and Web Spider reanimates their corpses to attack X. Spider battles X and gets the upper hand, and gloats about how the weapon he will use to burn down the city and kill the humans with cannot be stopped unless Spider is killed first. Not wanting to see so many people die, an enraged X breaks free of Spider's Lightning Web attack, and mortally wounds him with a Charged Buster shot. The beam cannon is deactivated, and while dying, Spider laments about how he feels that meaningless battles between Reploids and humans, as well as among Reploids themselves, will never end. He argues that because humans are flawed creatures, it was only natural that Reploids would be flawed as well since humans created them. He explains he went along with Repliforce's coup for independence because he didn't want Reploids to be doomed as "mechanical puppets" wandering in an "endless hell".

Web Spider appears in the Worlds Unite crossover event as one of the many Mega Man X characters featured in the Mega Man, Sonic the Hedgehog, and Sonic Boom comics. He is one of many Mavericks who appears alongside Sigma-2, having been cloned as part of a Maverick army that is deployed to attack various worlds. 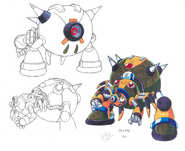 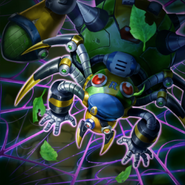 Retrieved from "https://megaman.fandom.com/wiki/Web_Spider?oldid=332075"
Community content is available under CC-BY-SA unless otherwise noted.