Whazzap, known as Nanzca (ナンスカ, Nansuka) in Japan, is a small village from south of Netopia accessible in Mega Man Star Force 2.

Whazzap is where Bud Bison falls from the sky after Rogue fights Geo Stelar in Echo Ridge and sends his Brothers to different locations with the Kamikakushi. Bud hits his head and loses his memory, and as he felt from the sky, the population believes he is a herald of Mu and calls him the great Budicus. Geo and his friends find him and try to make him remember who he is, but aren't successful in their first attempt.

Solo appears to investigate the area due to its relation with Mu, and is angry to see a fake claiming to be from Mu, attacking Budicus. Rogue (Solo) is fought a second time, and after Mega Man defeats Rogue, Hollow takes an injured Solo back to Lady Vega. Bud loses consciousness, but after Luna Platz gives him his favorite food, he awakens and recovers his memory, leaving Whazzap with his friends. The Shaman is not happy to see the great Budicus leave, and Hyde gives him an Ancient Star Carrier with Condor to become Terra Condor in exchange of information regarding Mu.

Later, when Mega Man is about to go back to Echo Ridge by the Sky Wave, Bud calls Geo and tells him that a giant bird (Terra Condor), has kidnapped him, Luna, and Zack. After a few challenges in the Whazzap Ruins, Mega Man fights Terra Condor, who threatens to tickle Geo's friends forever to send their laughter as an offering to Mu. After the battle, the Shaman returns to normal and apologizes for his actions, and thanks to Bud's idea, Whazzap gains more tourists with their spare ribs.

Whazzap is a village in a hot area with rocks and cactus, and some Allium plants. The village has unique buildings and a large stone statue with several flower and food offerings around it and two drums nearby. A sundial connects the village to the Sky Wave.

Electric Rock ES is the ES of a rock in Whazzap.

Mu Statue ES is the ES of the large stone statue made by the shaman when he was young. It can only be accessed after defeating Terra Condor. The area has a merchant Hertz that sells the Mega Weapon WhtBreth for 6000 Zennys.

The Whazzap Lines, known as Nanzca Lines (ナンスカちじょうえ, Nanzca Lines) in Japan, are mysterious geoglyphs in Whazzap that are symbols for the great empire, Mu. The drawings include:

The walls also countain drawings of the three ancient Tribes (Zerker, Ninja and Saurian) and some fossils.

Ammonite ES is the ES of a big ammonite in the walls of the Whazzap Lines.

Old Dragonfly ES is the ES of a security system disguised as a dragonfly fossil. A merchant Hertz sells an item here. FlitG is common in this area.

The Whazzap Ruins are the most ancient and sacred area in the whole of Whazzap area. It is an ancient temple for the land of Mu, which only the Shaman is allowed to enter. After completing the game, Pat Sprigs can be found training in this area, in order to subdue his evil alter-ego, Rey, and asks Geo to help him by fighting Gemini Spark.

During the secret ending of Mega Man Star Force 2, Rogue takes Mega Man into the peak of the Whazzap Ruins for their ultimate battle.

Whazzap appeared in episodes 11 and 12 of the Shooting Star Rockman Tribe anime. Every year there is a festival in which a bird selects a person and offers their most precious treasure to God. The Shaman mentions that in the past the person had to offer their heart, and when Condor takes control of the Shaman, he tries to take Luna's heart, but he is stopped by Mega Man. 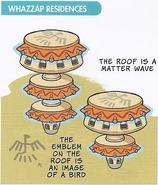 Concept art of the people of Whazzap.

Whazzap village in the anime.

Whazzap people in the anime.

Whazzap Ruins in the anime.