He was enraged when Spider betrayed him, after seeing his former bounty hunting partner Aile's ID in X's possession. Later, Jango appears on a monitor with a nearly dead Spider (X believed he was actually dead) on the ground and initiated the self-destruct sequence of Central Tower while holding Chief R hostage. He is then chased down by X, who receives help from Spider, surprising both Jango and X. Jango is then defeated, with X believing him to have died.

Jango later reappears at the Far East Headquarters. X and his party then defeated him, with X expressing shock during the aftermath that he had apparently survived. Axl then speculates that someone may have mimicked Jango with his copy chip ability.

He is extremely swift and fast, his speed being aided by a thruster-like booster on his back, which he takes advantage of in wielding his electrified claws. Jango is also capable of curling up and somersaulting through the air, striking his enemy with electricity and stunning them through his Rolling Assault attack. 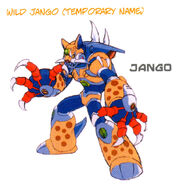 Retrieved from "https://megaman.fandom.com/wiki/Wild_Jango?oldid=306620"
Community content is available under CC-BY-SA unless otherwise noted.