The Wily Castle (ワイリー城, Wily Castle) from Mega Man 2 was the first Wily Castle to appear in the Mega Man series. After defeating the eight Robot Masters, Mega Man will invade the castle to stop Dr. Wily.

The first stage consists of the castle's outer wall, which Mega Man must scale, with a long upward trek. The main entryway into the castle at the end contains falling blocks.

This stage appears to be the castle's main thermal area, which contains long areas of spike-lined floor that have to be crossed.

This stage is the castle well, which contains spike-lined walls and aquatic enemies.

This stage is the defensive combat zone, which includes false holographic floors, riding lifts and snipers.

Several capsules in Dr. Wily's Teleport System will lead to rematches with all the Robot Masters in the game. Once they are all disposed of, another capsule appears, leading to your first encounter with Dr. Wily.

The final section is the castle's catacombs, with narrow passages and acidic liquid dripping from the ceiling.

The Wily Castle is the background from the Mega Man 2 handheld by Tiger Electronics. Also, the last stage has a cameo appearance in Mega Man 9, as Mega Man shows Wily's previous defeats in the ending.

The appearance of Dr. Wily's first Wily Castle is the same as the Wily Castle from Mega Man 2. In the end of Time Keeps Slipping story arc, Dr. Wily builds a Wily Castle II.

After defeating Dr. Wily's Robot Masters, Mega Man is teleported to Wily Castle II, and Wily takes control over him. Fortunately, Dr. Light noticed something was wrong with Mega Man and took precautions, being able to track Mega Man's location. Dr. Light sends his Robot Masters to the Wily Castle II to save Mega Man, were they are attacked by him and the Mecha Dragon. They manage to hold Mega Man and finish installing the anti-virus Light was uploading on him, making him return to normal, and he helps the Robot Masters defeat the Mecha Dragon. The Robot Masters explain to Mega Man what happened and they give him Item-1, 2 and 3. As Elec Man was damaged, he stays behind. Ice Man, Cut Man and Fire Man take Elec Man out of the base.

Mega Man creates two Item-2 to proceed through an area with spikes. Guts-Dozer appears in their path, and Guts Man angrily goes after his rip-off to fight against it, staying behind with Time Man and Oil Man while Mega Man and Bomb Man proceed and fight against the Boobeam Trap. After the battle, Bomb Man has no ammo left and stays behind while Mega Man goes after Wily and fights his Wily Machine. After destroying the Wily Machine, Wily transform into an Alien, but Mega Man discovers it is a hologram decoy and disables it, seeing the real Dr. Wily in a control panel. Mega Man tries to capture Wily, but he actives the castle self-destruct and escapes. Mega Man only has 5 minutes to leave the castle with the Robot Masters before it explodes, barely leaving it in time with everyone in an Item-2 at full speed.

After allying himself with Dr. Eggman, Wily helps him in building a massive new battle station that combines elements from both his Wily Castles and Eggman's Death Eggs. The two briefly argued about what to call it-Wily favoring "Wily Flying Fortress" while Eggman preferred "Death Egg 3"-before compromising and dubbing it the Wily Egg.

This Wily Castle appears in the story "R Destruction Order". When Wood Man reactives Dr. Light's Robot Masters and tries to convince them to join Wily, Elec Man and Ice Man pretend to agree to find Wily's hideout. Wily makes a broadcast from the Wily Castle stating that he built several "Skull Satellites" that would go into space and destroy the Earth if he didn't achieve world domination. Mega Man is then aided by the other four of Dr. Light's Robot Masters, and Roll passes him Item-2 to get to Wily's base, and he is chased by Heat Man. Meanwhile, Elec Man betrays Wood Man and burns him in the base. However, his plan on attacking Wily is foiled when his chest is slashed open by Quick Man, who takes the Mecha Dragon.

Mega Man arrives when the first Skull Satellite is about to launch, but he is able to destroy it in one shot. Four more are launched, and all are destroyed except one. Wily is about to launch even more, but the control panel is frozen by Ice Man, who captures Wily (and freezes Reggae in the original version from Rockman Remix). On the last Skull Satellite, Item-2's engines go out, and he lands on the satellite. However, Quick Man and the Mecha Dragon are on it too, and Mega Man quickly discovers his identity. He is about to be attacked, but Flash Man all of a sudden appears and blocks him. He explains he came back for repairs, but discovered Mega Man was there, so he ends up wanting to be the one to take him out. In one last onslaught, Mega Man dodges Quick Man, and destroys the entire satellite. Dr. Wily manages to escape while Ice Man is distracted with Mega Man's battle.

The remains of the Wily Castle is revisited in the Mega Man Gigamix story "Toward a Bright Tomorrow".

Wily Castle appears in the manga.

"The castle was terrifying. It was built of skulls and bones. The eyeholes in the skulls glowed red. Huge radar antennas were aimed in all directions."
—Book description

In chapter sixteen of the Worlds of Power book Mega Man 2, Mega Man goes to Wily's Castle of Evil after defeating his eight robots. In the area, he climbs the castle's outer wall and fights against its defenses. In the top he is attacked by a dragon, but manages to defeat it with the Quick Boomerang.

In chapter seventeen, Mega Man goes inside of a tower and slid down a long chute, ending in a dark area he believes to be the castle's basement. Mega Man follows through a tunnel and faces some Prop Tops. In one part of the path there was no more floor, and he almost fell into the path of spikes in front of him. Not wanting to fight against the Prop Tops again, Mega Man uses his Jet-Ski to continue, going on until he reach a tiny door. Mega Man got off the Jet-Ski and is stuck in a small, square room. The bricks from the dungeon suddenly start flying out of the wall at top speed. Mega Man uses the Metal Blade to destroy the bricks while he climbs the wall to reach the small trapdoor and escape the trap.

In chapter eighteen, Mega Man saw the castle's moat and dives down to see if he can find a secret entrance to Dr. Wily's laboratory. After swimming for some time without problems, an enormous fish appears behind Mega Man and tries to catch him. As he is underwater, Mega Man decides to use Bubble Lead against the fish, effectively destroying it. Mega Man kept on swimming and found a secret entrance. He uses Leaf Shield to blast his way past Dr. Wily's guards, but intead of finding Wily's secret lab, he stumbled into Guts-Dozer's Garage. Without a choice, Mega Man fights against the Guts-Dozer, all his weapons being useless against it, with the exception of the Crash Bomber. Mega Man leaves Guts-Dozer's Garage and spots a series of long ladders that he uses to leave the castle's basement. After climbing the first ladder, Mega Man heard the sound of static and than Dr. Wily manages to contact him. Wily says he has been watching Mega Man and is impressed with him, but suggests him to give up as he will not be able to get him. Mega Man says he isn't scared of Dr. Wily, and he better watch out as he is on his way. Mega Man enters in a small room with several doors, all locked, and Wily laughs, telling Mega Man he will need luck to find him. Mega Man used the Crash Bomber at every door, but as they were blasted down, he saw that there was nothing behind them, noticing that it was a trick and he was trapped.

Chapter nineteen starts with Mega Man looking around the area. He was in another room with nine hatches, all blinking brightly. Mega Man realizes he is in Doctor Wily's Teleport System and only needs to pick the right hatch to face Dr. Wily. He jumped into one of the hatches, and is attacked by a backup clone of Air Man. After a short fight, Mega Man returns to the previous room and tries another hatch, finding another of Dr. Wily's superrobots. He takes down Crash Man, Bubble Man, Metal Man, Flash Man, Wood Man, Quick Man, and finally Heat Man, jumping into the last hatch.

The hatch took Mega Man to a pitch-black area. In chapter twenty, a giant spaceship appeared out of nowhere and attacks with its cannons. Mega Man throws Metal Blades and damages the ship. The spaceship shuddered and a flying saucer lifted off from the top of it. The top of the saucer lifted up, showing Dr. Wily inside waving to Mega Man, and he leaves the area. Mega Man ran after Wily's saucer, following it down into a tunnel. He lost sight of the saucer, but kept on running through the tunnel, which had acid dripping from the ceiling, using Time Stopper to avoid the acid and reach the saucer. He suddenly tumbled head over heels into a black void. Stars shone all around him, as if he'd been transported into outer space. A green mutant alien appeared in front of Mega Man, and he jumped back as the alien came closer. Mega Man grabbed the first weapon he could lay his hands on, the Bubble Lead, and shot it continuously as the alien was approaching. Suddenly there was a superbright flash of light.Mega Man covered his eyes, and as he slowly took his hands off his eyes, he saw he was no longer in outer space. He was in Dr. Wily's laboratory. The alien was a mirage to scare Mega Man, but the Bubble Lead destroyed it, and Dr. Wily was on the floor by Mega Man's feet, begging for mercy. In the last chapter, Mega Man had turned Dr. Wily over to Dr. Light for justice, being put into prison for several years. 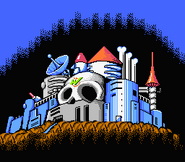 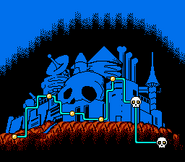 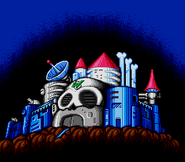 Wily Castle stage in Super Smash Bros. for Wii U.

Wily Castle in Rockman: Dr. Wily no Inbou.
Add a photo to this gallery

Retrieved from "https://megaman.fandom.com/wiki/Wily_Castle_(Mega_Man_2)?oldid=198497"
Community content is available under CC-BY-SA unless otherwise noted.