Wily Castle (ワイリー城, Wily Castle) is Dr. Wily's fortress in Mega Man 7, where Mega Man will go after defeating the eight Robot Masters. As with previous Mega Man games, Wily Castle consists of four parts, each part being a stage Mega Man must go through. The final part of the fortress ends with a battle between Mega Man and Dr. Wily.

The first section is the main entrance to the castle hall, which contains spinning platforms and special weight-sensitive floor tiles that turn off the lights when Mega Man is grounded on them, making it difficult to move around.  A short battle with Bass occurs about halfway through the stage.

The second stage has turtle statues adorning the walls. The area is inhabited by lots of Sniper Joes. Mega Man will also battle with Bass again, this time with Bass combined with Treble.  Finally, Mega Man must navigate through several familiar hazards, like treadmill-like platforms in rooms lined with springs and the flame jets from Turbo Man's stage.

A short stage that has Mega Man refight the eight Robot Masters, followed by the final battle with Dr. Wily himself.

Wily Castle appeared in the Rockman 7 manga, where it is hidden inside an inactive volcano. Like the game, Mega Man invades the fortress and fights against several robots before finding Dr. Wily. 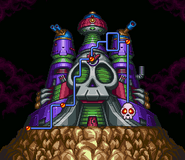 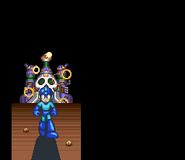 Wily Castle exploding in the ending. Wily Castle in the Rockman 7 manga.