The Wily Castle used by Dr. Albert W. Wily as his base in the game Mega Man: The Power Battle. After defeating three of the six Robot Masters, the fortress appears flying in the center of the stage select screen. Later, after defeating the remaining Robot Masters, Mega Man, Proto Man, or Bass arrives here to battle the Yellow Devil (when playing in Mega Man 1~2 or Mega Man 3~6 modes) or VAN Pookin (in Mega Man 7 mode) and a Wily Machine. Although labeled a Wily Castle, it operating by levitating indicated that it was closer to one of the Wily Stations from the Game Boy Games.

Inside the Wily Castle 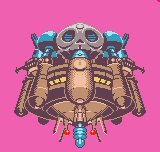 Wily Castle in Rockman Battle & Fighters.
Add a photo to this gallery
Retrieved from "https://megaman.fandom.com/wiki/Wily_Fortress_(Mega_Man:_The_Power_Battle)?oldid=293965"
Community content is available under CC-BY-SA unless otherwise noted.