"Wha... Why you insolent fool! I will crush you with a loud, loud crunch! Behold, my latest creation, the ultimate combat robot, Wily Machine Number 1!"
—Doctor Wily shows off his Wily Machine in Mega Man Powered Up

Wily Machine 1 (ワイリーマシン1号, Wairī Mashin Ichi Gō) is the first Wily Machine created by Dr. Wily in the original Mega Man series. It is the final boss from the first Mega Man game and Mega Man Powered Up, appearing in the final Wily Stage.

As Dr. Wily didn't expect Mega Man to be able to defeat all his subordinates and reach him, Wily built this machine in a hurry to fight against Mega Man, resulting in this strange looking machine.[1] When Mega Man enters the room, Wily connects his UFO on the top of the machine to go inside and control it. The Wily Machine's first form can only take damage on the red gun in the front, which is weak to Fire Storm. The gun fires small energy spheres upward that fall in an arc.

After depleting the first energy gauge, the Wily Machine's gun and defensive shield will be destroyed, revealing Dr. Wily in the controls. An emergency device is activated, increasing the machine's attack power.[1] The remaining hole from the gun now shoots spiraling large balls of energy. The second form has no specific weakness, but Thunder Beam can hit it twice with one beam. Another, albeit risky, method is to use the Rolling Cutter, which can hit it three times if timed correctly. A good strategy is to switch between weapons. Use Rolling Cutter when he is flying backward, and use Thunder Beam when he is going backwards.

Mega Man Powered Up
The Wily Machine Number 1 in Mega Man Powered Up is, at first glance, vastly different from the Wily Machine of the first game. However it's truly just a slightly modified version of the original clipped on to a base, and thus giving it its uniquely designed first form. The first form is a skull tank that roams horizontally along the ground, and its attack varies according to the mode/difficulty:

The Wily Machine's weakness in Normal and Hard corresponds to the owner of its equipped Special Weapon (e.g. If the machine uses Fire Storm, its weakness would be Ice Slasher. The Time Slow does not stun the Wily Machine while it uses Super Arm, only Time Man's clock hand projectiles can accomplish this). Like most Wily Machines, it is only vulnerable in the cockpit. In all three difficulties of New Style, Mega Man C's Charge Shots, Proto Man's Proto Strike, Mega's Mega Kick and Roll's Roll Swing can stun the Wily Machine during this phase regardless of the Wily Machine's currently equipped weapon. On Easy, Wily will take off as soon as this form is beaten, causing the fight and game to be over sooner.

The second form can only be fought on Normal, Hard or Old Style. After the first form has fallen to pieces, Wily gets up and starts to tinker with the machine (whilst the player's character stands there and watches him do it). The repaired Wily Machine, which now looks extremely similar to the second form of the Wily Machine from the first game, rises from the rubble and starts flying. In Normal, Wily will hover up and down, while on Hard and Old Style, he will drift back and forth while hovering at various heights. In Normal and Hard, he will still use the same Special Weapons as those in the previous form though with a couple of differences:

The Wily Machine also gains a new attack that differs on the player's character:

After the Copy Robot is destroyed by the Robot Masters in issue 4, Dr. Wily appears in the room inside his first Wily Machine and starts shooting Mega Man. While attacking, Wily mocks Mega Man saying that he is just a helper robot, a lackey he had not stolen with the Robot Masters due to not being worth the effort and that should save himself from further embarrassment. While Wily is talking, Mega Man uses the Magnet Beam to go above the Wily Machine and jumps on the cockpit, punching it with the Super Arm.

Mega Man continues attacking with other Special Weapons while saying he is not embarrassed as he has a creator and sister who cares for him, while Wily had to steal his creator's robots to get attention, and even though he reprogrammed them, they could not stop a "lackey" like him. He asks Dr. Wily which one of them should be embarrassed and attacks with Fire Storm, opening the cockpit and revealing Dr. Wily inside. When Mega Man tries to use Fire Storm again, he can't attack due to being out of ammo. Wily laughs of him as he can't attack and he is still able to fly, saying he won by default, but Mega Man jumps on the Wily Machine and takes it down with a charge shot. With Wily defeated, Mega Man takes him out of the wreckage and sends him to the authorities.

When Mega Man returns to Wily's fortress in the story arc Time Keeps Slipping, the remains of the Wily Machine can be seen in one panel from issue 6 and issue 7.

After passing by many dangers inside Wily's fortress, Mega Man finds Dr. Wily piloting the Wily Machine. Despite its menacing appearance, Mega Man manages to take it down with two attacks, the first opening the cockpit and the second blowing the machine. After the battle, Mega Man talks with the injured Dr. Wily and leaves the fortress.

In the third episode of the OVA, Dr. Wily uses a vehicle similar to the Wily Machine 1 named Skullker (スカルカー, Sukarukā, "Skull Car") to leave the video game world. 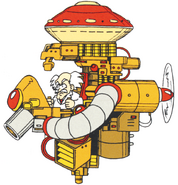 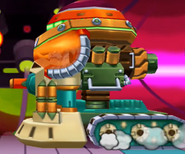 Concept art of the Wily Machine in Mega Man Powered Up.

Concept art of the Wily Machine in Mega Man Powered Up. 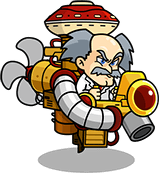 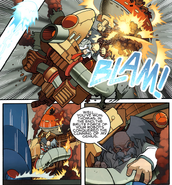 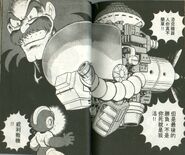 Wily Machine in the Rockman manga.

Skullker in Mega Man: Upon a Star.

Skullker in Mega Man: Upon a Star.