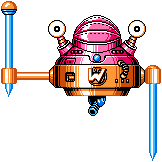 Wily Machine 3 (ワイリーマシン3号, Wairī Mashin 3 Gō), also called the Pinbot in the NES Game Atlas, is the third Wily Machine used by Dr. Wily in the Wily Castle to fight against Mega Man. It is the first Wily Machine to use a walking system instead of being aerial, having large nails as legs and walking sideways like a crab. After the defeat of his previous Wily Machines, Wily designed this machine with a cockpit on the top so Mega Man would not be able to reach it. However, Wily didn't count with Mega Man's new partner, Rush, allowing him to fly and easily reach the cockpit with Rush Jet.[1]

The Wily Machine 3 appeared in issue 47 of the Mega Man comic series by Archie Comics, where Mega Man fought it shortly after disabling the Doc Robot. Mega Man noted that it resembled the Wily Walker, Wily's earlier creation that had led to him being banned from work on robotics (a comics-exclusive concept). After defeating it, he attempted to interrogate and apprehend Wily, only to discover it was actually a robot in disguise (which was foreshadowed by it constantly repeating his threat during the battle), although Mega Man noted that the presence of a fully operational control unit indicated that Wily had at one point intended to use it himself. Mega Man proceeded to link up to the Wily Machine to discover the location of Wily and Gamma.