Wily Machine 4 (ワイリーマシン4号, Wily Machine 4) is Dr. Wily's fourth Wily Machine, a skull-shaped flying machine that shoots energy balls. It appears as the penultimate boss of the Wily Castle from Mega Man 4. The Wily Machine 4 also has a brief appearance in the opening scene of Mega Man 8.

The best way to attack the first form is with Ring Boomerang. Get close to the skull and shoot while dodging the energy orbs. This shouldn't be hard. Once defeated, the skull will vanish and Dr. Wily will appear.

The best way to attack the second form is with Drill Bomb or use the Mega Buster if the Drill Bomb has no energy left. Time it so bomb will denonate and the explosion hits the blue gem just below Wily. Do this enough times to defeat the Wily Machine. But Mega Man still have to face the final Wily boss in the final stage, which is the beginning of the Wily Capsule bit that will continue to appear for the rest of the series. For this, use charged Pharaoh Shot, since it can be aimed, and the player can even hit Wily with the charged up fireball without launching it, saving energy.

Another lesser known way of attacking the second form of the Wily Machine 4 is to walk underneath the machine and use the Wire adapter to hit the vulnerable gem. If the player is lucky, the wire will hit the gem once on the way up, and again on the way down. The second benefit is that if Mega Man is far enough underneath the machine, the machine's energy spheres can't reach Mega Man. Normally, the player will be able to take out about half of the machines energy bar before the Wire adapter runs out of energy. Then, use the Drill Bomb or Rush Coil to finish it off.

When the front cover of the skull is destroyed, the beam's speed is up. The beam is hard to come by, so let's quickly use a weak weapon.

In Ruby-Spears' Mega Man animated series, Dr. Wily's main transport is a machine named "Skullker", which appears to be based on the Wily Machine 4. The Skullker has several features such as retractable arms, a tractor beam, ejectable seats, the Wily Capsule and the ability to attack with laser beams. In the episode Incredible Shrinking Mega Man, Wily equipped a shrink ray on the Skullker, but Mega Man turned the ray in the Skullker's direction when it was ready to fire and made it shrink, forcing Dr. Wily and Proto Man to abandon the vehicle. A weakness of the Skullker is that when it has water near or it gets wet, it doesn't work properly. 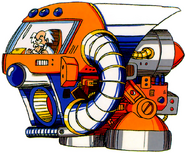 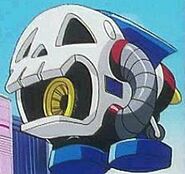