The Wily Tower (ワイリータワー, Wily Tower) is Dr. Wily's fortress and the last area from Mega Man: The Wily Wars, available in the mode of same name that is unlocked after completing the three Mega Man games in the collection. Mega Man goes to the tower after defeating the Genesis Unit.

The first stage, the base of the tower. At one point, it splits in two paths. The standard path has lava and Drop Lifts. The alternate path requires the Crash Bomber to destroy the blocks in the way, and contains a large pit and Foot Holders, and an Extra Life blocked by a rock that must be removed with Super Arm or Thunder Beam. Either way, Rush Jet and other transport items can make those passages easier.

The second stage. Near the beginning there is a room with a ? Can that requires the Crash Bomber to be accessed. It has alternate paths.

The third stage. It has an alternate path that is blocked, requiring the Hard Knuckle to be accessed.

The final stage, a short area. Proto Man appears to open a path for Mega Man.

In the comic, the Wily Tower is a research institute called Chronos Institute that is researching time travel, as evidenced by the appearance of a disabled Time Man lying in the corner on the first page. Dr. Wily invaded the institute with the Genesis Unit and the Mega Man Killers to take over a time-travel device. Using the device, Wily remodelled the institute into a fortress. Shortly after, Mega Man appears to stop Dr. Wily, and he is hit by the device's energy, which sends him to different time periods. 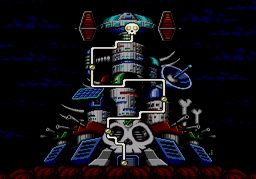