"I wanted to see... See if the Reploid that fascinated him so was really all that great... So, let's see what you're worth!"
―Wind Crowrang, Mega Man X7

Wind Crowrang, known as Wind Karasting (ウィンド・カラスティング, Windo Karasutingu) in Japan, is a crow-based Reploid who is a member of the Red Alert vigilante syndicate and one of the Mavericks encountered in Mega Man X7.

Wind Crowrang was designed after a crow, possessing predominantly black armor along with a large beak and a pair of wings. He also had feather-like structures along his forearms and the segmented toes of a bird rather than typical Reploid feet. He wielded two curved beam sabers in combat. The blue crystal on Crowrang's forehead resembles a tokin, which is a cap often worn by tengu in Japanese mythology. This might be because tengu are wind spirits that are often associated with crows.

Wind Crowrang was a refined yet fierce individual. He held little respect for anyone but himself, showing that he was quite prideful. He disregarded X's desire for peace and believed that fighting was the only way. During battle, it was customary for Crowrang to charge at his opponents through the air with his full power, as Axl attested to. However, there are also several things about Crowrang that suggest he was more than a simple-minded warrior. He once stated that he wanted to know why "he" was so fascinated by Zero, implying that he was aware of Sigma and his interest in Zero. He also appeared to hold back against Axl, and even double-checked if Axl was set in his decision to leave Red Alert before fighting him. In the Japanese version he has a deep and calm voice, while in the English version he has a shrill bird-like voice.

The player faces Crowrang on a plane after fighting their way through his air force. He will launch long-range attacks from a distance in the background and fight face-to-face in the foreground.

Crowrang can perform the following attacks:

His weakness is Sniper Missile and Hieijin; these can even hit him in the background. However, these weapons can target Crowrangs projectiles instead, making X's charged buster shots a much better choice when attacking him from the foreground.

X: Where are you? Come out and face me! Wind Crowrang: Hmph...I can see it in your eyes... You would prefer to avoid a fight... X: Yes, of course. I don't want any more people getting hurt. Wind Crowrang: You really are a soft fool, X. Well then, just stand there peacefully while I erase both you and your silly ideals!

Zero: Before I destroy you, let me ask you a question. What is your real purpose? It can't just be getting Axl back. Wind Crowrang: I wanted to see... Zero: ? Wind Crowrang: See if the Reploid that fascinated him so was really all that great... So, let's see what you're worth!

Axl: This isn't like you. Cooped up in a place like this. I thought you'd fly straight at me, full force? Wind Crowrang: So you're never coming back? Axl: You know my answer to that. Wind Crowrang: Heh, you never change, do you?

Wind Crowrang appears in the Worlds Unite crossover event as one of Sigma-2's Mavericks. He is sent to invade Morning Land, the world of Billy Hatcher, but is defeated by Billy and his companions. Before being finished off, Crowrang expresses disbelief that he had been defeated by an egg, with Billy explaining he's had prior experience with his kind. 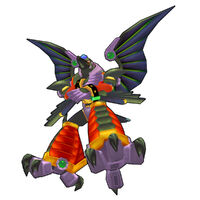 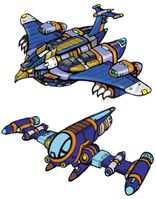 Concept art of the airships from Wind Crowrang's stage.

Retrieved from "https://megaman.fandom.com/wiki/Wind_Crowrang?oldid=342765"
Community content is available under CC-BY-SA unless otherwise noted.