Wind Man (ウインドマン, Uindoman) is an air-themed Robot Master that was originally created to work in agriculture, helping in the harvest. He has a strong rivalry with Air Man. In the First Annual Robot Tournament, he was stolen and reprogrammed by Mr. X to help him in his plan to conquer the world.

With his weapon, Wind Storm, he can generate powerful winds that can reach a speed of 200 m/s, which he uses to pull enemies, increasing the speed if damaged. Wind Man has jet engines in his feet that allow him to hover and move faster, which he also uses to attack by moving above the opponent to smash him with his weight. His weakness is the Centaur Flash.

Wind Man attacks by shooting two propellers, one up and one down, each one in a similar wavy fashion. It is avoided by timing a jump over them when they get joined. He also tries to suck Mega Man towards him and deal touch damage. It is avoided by sliding to the opposite direction Mega Man is being sucked. Wind Man also lifts himself and tries to land over Mega Man. This is avoided by sliding below him before he even lands over him. His weakness is the Centaur Flash, but the player has fair enough energy to defeat him, so it is recommended not to use it on his level so the player arrives at his room with a full weapon gauge. On battle, if used on him, the player should wait until Wind Man stops flashing after being damaged to use it again without wasting any energy with no use. It defeats him in seven flashes. 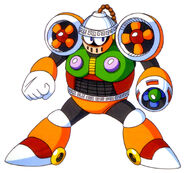 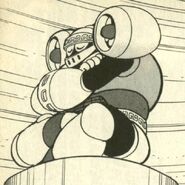 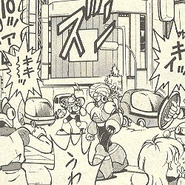 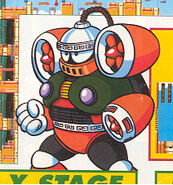 Retrieved from "https://megaman.fandom.com/wiki/Wind_Man?oldid=198731"
Community content is available under CC-BY-SA unless otherwise noted.