MMKB
Register
Don't have an account?
Sign In
Advertisement
in: Articles with hAudio microformats, Articles in need of expansion, Reploids,
and 8 more

Wire Sponge, known in Japan as Wire Hetimarl (ワイヤー・ヘチマール, Waiyā Hechimāru), is a luffa-type Reploid from the Mega Man X series that first appeared as a boss in Mega Man X2. Created in one of Sigma's Maverick producing factories, an accident resulted in him having a personality disorder, which causes him to be childish and easily amused, loving to dance and play. Yet, he was violent and still had impressive combat abilities, so Sigma placed him in charge of a Weather Control Center to use as his personal playground, where he found delight in passing the time by playing with the weather system.

Wire Sponge is one of the eight bosses. Due to him causing trouble with the weather, X had to stop him in the weather control center. X obtains the Strike Chain after his defeat.

Wire Sponge is one of the four bosses from the Zero Mission, and one of the eight bosses in Extreme Mode. Like Mega Man X2, Wire Sponge was causing trouble in a weather control center from Laguz Island, and had to be stopped by Zero. Zero obtains Lightning after his defeat.

Wire Sponge uses his Strike Chain like a whip and grappling hook. One of his attacks is to latch his chain on to the ceiling and spit seeds in X's direction while gradually pulling himself up; these vine seeds can be destroyed by two normal shots. He will also spin his chain in front of him as a form of defense (which only Sonic Slicer can cancel) and throw it horizontally (if it catches a far wall he will pull himself in that direction). When Sponge's health is less than half he will become enraged and electrified, causing lightning bolts to strike for a moment; he is also invulnerable in this state. Wire Sponge is easily fought with just the X-Buster firing charged shots, but if the final blow is dealt with the Sonic Slicer, he will be split in half. He is also vulnerable to the Speed Burner. When Zero faces him in Mega Man Xtreme 2, he can be defeated with the Drill Crush.

Wire Sponge has the distinction of being the only Maverick to survive his battle with X in the Rockman X2 manga, being repaired by Dr. Cain immediately following his defeat. This is due to Dr. Cain telling X to drop the idea of continuing the battle after Sponge revealed he was scared of fighting anymore. This is further shown by the fact that it was Dr. Cain who had stopped X from shooting Sponge by using his electrified cane to interfere.

Wire Sponge was one of many Mavericks who appeared in the Worlds Unite event after being revived by Sigma. He and most of his fellow Mavericks from the series were dispatched to various worlds through Genesis Portals to plant Unity Engines, following a brief attack on the heroic crew of the Sky Patrol.

Wire Sponge was revived and powered up by Dr. Doppler's Limited. 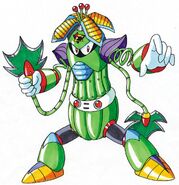 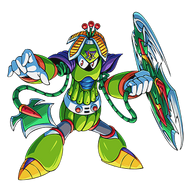 Wire Sponge's remains can be seen absorbed into the Tower of Verdure.