WoodMan.EXE is the NetNavi of Sal in the MegaMan NT Warrior anime series. Much like his operator, WoodMan had a prominent role in the first season before the two of them were removed from the cast at the start of Axess, although the duo did return in two episodes of Axess.

WoodMan is Sal's NetNavi and she uses him to NetBattle in the N1 Grand Prix. WoodMan also assists Sal in her Net Agent role as the Black Rose, with the two of them working alongside fellow Net Agents Maysa (disguised as Commander Beef), SharkMan, Miyu (disguised as Mysteriyu), and SkullMan.

WoodMan first appears during the events of episode 7, when Count Zap and ElecMan attack the Ayano servers to prevent a video game release. WoodMan quickly comes to MegaMan's rescue, helping fend off the WWW agent. Throughout the first season, WoodMan and Sal would help Lan and his friends fight off the forces of Grave. One such event involved Sal's childhood friend Dave, who had joined Grave to help protect the environment under the alias of The Earth Avenger with his Navi QuickMan. Through use of the LinkChip, WoodMan and MegaMan were able to defeat QuickMan, though it would soon be revealed that both Dave and QuickMan weren't really loyal to Grave's cause and had only wanted to scare people into taking better care of nature itself.

Sal and WoodMan would make two guest appearances from within Axess; the first is when Sal and the Net Agents help Lan and his friends save their teacher Ms. Mari from Gauss and the second is when the Darkloid SparkMan attacks a train server, intent on causing a crash. MegaMan and WoodMan team up to stop him and during the battle itself, MegaMan obtains the WoodSoul DoubleSoul, enabling him to fight and delete SparkMan for good. 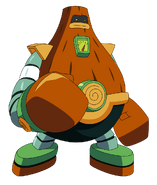