"How dare you do this to Shadow Man?! You even destroyed his core. He can't come back now. He was... he was my only friend! I'll avenge him! Fight me!"
―Wood Man, Super Adventure Rockman

Wood Man (ウッドマン, Uddoman) is a combat Robot Master created by Doctor Albert W. Wily using natural Japanese cypresses. He has a very unique design due to his body being made almost completely out of wood- including his internal mechanisms, along with a thin coating of metal for extra protection. Because of this, Wood Man has great strength and resistance against physical blows, but is somewhat slow and highly vulnerable to fire and cutting weaponry.

His Special Weapon is the Leaf Shield, leaf-shaped pieces of Ceratanium that are sharpened around the edges and levitated using electromagnetism that can be used to protect himself and attack enemies in different ways, including launching them in rings of four or eight and summoning them down from the ceiling to fall down onto the target. Due to his flammable construction, his primary weakness is the Atomic Fire.

Wood Man is apparently one of Dr. Wily's favorite robots, due to his unique, resilient design, and according to the amount of times he has been called into action against Mega Man.

Wood Man is kind to his subordinates, especially the animal-based robots that guard his stage, but is easily offended and has little tolerance for those who harm nature. Wood Man enjoys the world's natural beauty, and often goes hiking and mountaineering in his spare time.

Wood Man is one of the eight robots created by Dr. Wily to destroy Mega Man. After getting through a forest, Mega Man confronts him and defeats him.

In battle, he activates his Leaf Shield and throws four leaves to the ceiling. Wood Man then throws the shield and the four leaves float down to make it difficult dodge the shield. The Leaf Shield will deflect everything Mega Man shoots at Wood Man; however, it can be avoided by jumping over it and then moving to a position where the falling leaves don't hit Mega Man. After that Wood Man is vulnerable and can be attacked.

His weakness is the Atomic Fire, which defeats him in fourteen normal shots, five slightly charged shots and only one charged shot in the Normal mode from the English NES version (two charged shots in the original Difficult setting). However, the Leaf Shield will still deflect the Atomic Fire if it hits the shield.

Air Shooter is also a good option, as the three tornadoes can hit him for massive damage. It defeats him in four shots in Normal mode and seven in Difficult setting.

Metal Blade is also a good option, but it can only damage Wood Man after he has thrown his shield. It defeats him in seven blades in Normal Mode and fourteen in Difficult setting.

The Crash Bomber can also be used against him, but it should be used on his shield, so the explosion will pass through his shield and score for multiple hits (a maximum of three hits). It defeats him in seven hits in Normal mode and fourteen in Difficult setting.

Not only Crash Bomber, but any weapon can pass through Wood Man's shield if Mega Man is close enough. This is easier to do with the Mega Buster due to the projectiles being smaller, as bigger projectiles may be deflected by Wood Man's shield. However, this may provide to be risky as the player may be hit if he gets too close or isn't able to dodge Wood Man's attacks.

Wood Man has a cameo appearance in Mega Man 3 as data of the first Doc Robot in Shadow Man's stage. The Doc Robot with his data is weak to Needle Cannon and Search Snake. However, it is more recommended to defeat him with the Needle Cannon, as it is easier to hit the Doc Robot with it and it can deal more damage with consecutive hits for lower weapon cost. Any of these weapons defeats it in seven hits. unlike Wood Man, Doc Robot's Leaf Shield spins faster and the leaves are darker, but it's just for aesthetic purposes and doesn't affect gameplay.

Wood Man appears as a mid-boss in the Sega Saturn version of Mega Man 8, as a one-time boss in Search Man's stage. He grants Mega Man a Bolt (relocated in the PlayStation version) when defeated, making it the only mandatory Bolt in the game. He now jumps more than one time after throwing the shield. He is weak to the Astro Crush and Flame Sword, the latter one being more recommended due to its lower energy cost and dealing the same damage. Any of these weapons will pierce through his shield and defeats him in ten hits.

Wood Man has a cameo appearance as data of the Weapons Archive and is weak to Triple Blade.

Wood Man is one of the first four bosses from the Game Boy Mega Man II. He acts in a similar way to his appearance in the NES Mega Man 2. His weakness is the Metal Blade.

Wood Man is one of the six bosses from the "Mega Man 1~2" course. Like Mega Man 2, he fights by using his Leaf Shield and jumping, but now he is also able to attack by taking the shape of a log and roll.

Wood Man is one of the eight team bosses in the Capcom Championship mode, and one Wood Man joins Mega Man's team when defeated. He has the lowest run speed from the game, but in compensation he has a good kick and the second best tackle and defense from the game (the first being Dr. Wily). His special is Wood Shoot. His team in Tournament mode is made of three Wood Mans, Flash Man, Gemini Man, Top Man, Snake Man, and Toad Man. In League mode his team has three Wood Mans, two Air Mans, two Gemini Mans, and Enker.

Wood Man appears as the first boss of Episode Two. Here, it is revealed that when Mega Man destroyed Shadow Man at the end of the previous episode, he also obliterated his core, making it impossible to repair him. As a result, Wood Man is seen to be incredibly angry and vengeful towards Mega Man, vowing to kill him for what he did to his only friend. At first Mega Man is reluctant to fight, but he remembers what Proto Man and Quick Man told him and fights, defeating Wood Man.

Wood Man and Wily's other robots (except for Shadow Man) are later revived by Doctor Wily and Ra Moon near the end of Episode 3, but they are betrayed by Ra Moon and incapacitated. If Mega Man is defeated by the New Yellow Devil, he can ask the robots to give him their remaining energy. Wood Man and Hard Man protect Mega Man while everyone gives their energy, shutting down afterwards. Wood Man and the others are apparently destroyed alongside Ra Moon and its temple.

Mega Man Legacy Collection text: Kindly, but powerful. This robot is equipped with the almighty Leaf Shield, which can deflect any attack. When the shield's down, that's your chance!

Translation: Gentle and powerful. His body is made of all-natural wood with a special coating that gives him a luxurious feel. Naturally, he is highly flammable! His special weapon is Leaf Shield.

Amount of damage in units that Wood Man receives from each Special Weapon from Mega Man 2 and Mega Man 8.

Wood Man appeared in the episode The Strange Island of Dr. Wily. In the animated series, Wood Man's Leaf Shield takes the form of a large leaf-shaped shield made of treated metal, sharpened around the edges, and is wielded almost like a tennis racquet. The leaf can also be thrown like a spear, although it returns to Wood Man.  It is quite strong, being able to destroy stonebots in a single hit while Cut Man's Rolling Cutter could not make a scratch. He accompanied Doctor Wily, Cut Man and Guts Man to the titular island to assist them in the experimentation with the "Stonebots".

In Episode 20 of Captain N: The Game Master, Wood Man and other robots from Mega Man 2 play soccer against the main characters. This version of Wood Man has a wooden shield on his left arm instead of the Leaf Shield, and his right arm is a blaster that can shoot vines.

In this manga, Wily developed Wood Man for combat in wooden areas, so he was designed with camouflage as a main feature. The Leaf Shield is an electromagnetic field that surrounds him with leaf-shaped units made of Ceramic Titanium, which are coated with a special substance that makes them impervious to all attacks.

In the story "Orders to Destroy R", Wood Man and his minions rescued Dr. Light's robots from their scheduled destruction and tries to convince them to join Dr. Wily. Elec Man and Ice Man went with him in a helicopter to the Wily Castle, but they only followed him to capture Wily, defeating Wood Man at the base.

In the original version of the story from Rockman Remix, Wood Man only appears briefly being thrown out of a helicopter and exploding during the fall, being defeated by Fire Man and Bomb Man. The two jump from the helicopter before it explodes and fall near Wood Man's burning body. Wood Man later appears injured in the last panel with Wily's other seven robots.

Wood Man is the second robot to be fought by Mega Man. At first he uses his Leaf Shield for attack and defense, but when he is going to jump on Mega Man, he is attacked by the Metal Blade while in the air and is defeated.

After Crash Man is defeated by Mega Man, Wood Man, Air Man, and Metal Man appear and attack Mega Man at the same time. Mega Man manages to defeat them by using their weakness, first defeating Metal Man to take his Metal Blade and use it against Wood Man, then taking his Leaf Shield to defeat Air Man.

Wood Man appears briefly in two panels from Rockman: Yomigaeru Blues as a member of the Wily Patrol. He also appeared in the Mega Man 2 novel and the manga Rockman 4Koma Dai Koushin and Rockman wo Tsukutta Otokotachi - Rockman Tanjou Densetsu. 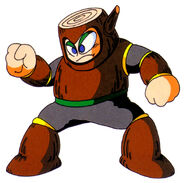 Front, side, and back view of Wood Man. 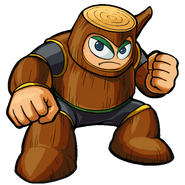 Wood Man, as he would appear in Rockman Online.
WM5.PNG
Wood Man in the Mega Man cartoon show. 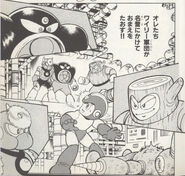 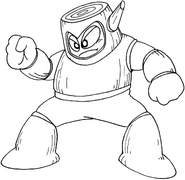 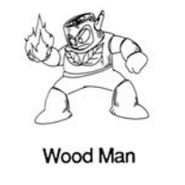 Wood Man, as seen in the Mega Man 2 English manual.