Wood Ninja, known as Green Shinobi (グリーンシノビ, Gurīn Shinobi) in Japan, is the Tribe On form of Mega Man after he obtains the power of the ancient Star of Ninja OOPArt.

Wood Ninja holds the Star of Ninja in his right hand, his whole body is colored green, having compacted design and steel joints, which fits the ninja theme it was based on. This allows for fast and stealthy movements and attacks.

Wood Ninja is a traditional shinobi, using stealth and speed to deal quick, deadly strikes to delete his enemies. He makes use of clones to mimic a clan of ninjas attacking its targets, relying on fast hitting strikes and counterattacks to overwhelm all opposition.

Wood Ninja is a character in the manga. He is a survivor from the Shooting Star Rockman Tribe that was forced to work for Rogue and fights against Thunder Zerker in the Mu continent. He joins Thunder Zerker after his defeat. 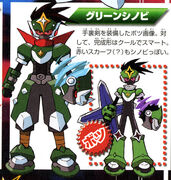 Concept art of Wood Ninja.
Add a photo to this gallery

Retrieved from "https://megaman.fandom.com/wiki/Wood_Ninja?oldid=287031"
Community content is available under CC-BY-SA unless otherwise noted.