After the first Genesis Wave, the blue Chaos Emerald from Sonic the Hedgehog's world had disappeared. Some time later it was found by Dr. Wily in Mega Man's world, and while analyzing it, Wily accidentally entered in contact with Dr. Eggman. Both villains decided to work together, creating the Skull Egg Zone to reunite and plot against their blue nemeses, first creating the Wily Egg, where they cause a new Genesis Wave to alter the reality of their worlds, and they are the only persons who retain the memories of both their original and new lives. The timeline of the altered realities from both Mega Man's and Sonic's worlds are apparently based on the video game series instead of the comics, being set after the events of recent video games like Mega Man 10 and Sonic Generations.[2]

The doctors proceed to collect the other Chaos Emeralds for their main plan, and they capture Sonic's friends to turn them into Roboticized Masters and help in their search. While stealing a Chaos Emerald from Mega City, Mega Man confronts the Roboticized Masters and follows them, being lured to enter Sonic's world by a Warp Ring. There, the doctors trick Mega Man and Sonic to fight each other by using Copy Robot and Metal Sonic, but unexpectedly, Dr. Light manages to bring Mega Man back to his world, alongside Sonic. After learning of their mistake and rescuing Tails, they go to Light Labs, where they witness Bass and Metal Sonic entering a Warp Ring with Dr. Light. By analyzing Dr. Light's data, Tails manages to reopen the Warp Ring and the heroes enter the Skull Egg Zone.

Mega Man, Proto Man, Rush, Sonic, and Tails confront Copy Robot and the Genesis Unit, and later the Roboticized Masters, returning them to normal one by one. Meanwhile, inside the Wily Egg, Rouge the Bat trades information with Dr. Light, and she tries to sabotage the Wily Egg, but is captured and transformed in a Roboticized Master. She, alongside an army of revived Robot Masters, are sent after the reunited heroes, now including Sonic's restored friends and E-123 Omega. Eggman notices that Dr. Light could cause trouble to their plans even while being held prisoner, and decides to kill him by dropping him from the Wily Egg, which angers Wily and makes both doctors plan to backstab each other. Rouge is restored and Dr. Light is saved by Shadow the Hedgehog, and while everyone takes care of the army of Robot Masters outside, Mega Man, Rush, Sonic, and Tails invade the Wily Egg. After dealing with several menaces, including the Mega Man Killers (with Tails being injured and sent back to the others with Rush), Chaos Devil (which is fought by Duo), Metal Sonic, and Bass, Mega Man and Sonic are captured by the doctors, and they reveal their plan to create a Super Genesis Wave to completely change their worlds.

When the group outside gain support from Dr. Light's original eight Robot Masters, Dr. Light, Proto Man, Rush, and Knuckles enter the Wily Egg and rescue the blue heroes. Eggman and Wily try to stop them with the Egg-Wily Machine X, but as they sabotaged each other, they are unable to fight and make a truce to repair it. They start the Super Genesis Wave, apparently winning, but while Proto Man and Knuckles were facing the doctors, Sonic and Mega Man used the Chaos Emerald to perform a super transformation, easily defeating the Egg-Wily Machine X. Although the reality of their worlds were completely changed, Sonic teaches Mega Man how to revert them back to normal. Mega Man successfully restores his world, but Eggman, unwilling to accept defeat, interferes with Sonic's attempt to restore the reality from their world.

Soon, another phenomenon created in the aftermath of this event was discovered in the future of Sonic's world, Genesis Portals. Created when Sonic's multiverse was altered, these portals caused travel throughout time, space and dimension to other worlds. In the future of Mega Man's world, the diabolical Sigma discovered the Genesis Portals, and saw them as the perfect opportunity to conquer many worlds. His actions would lead to another encounter for Mega Man and Sonic's worlds, which saw the two heroes and their allies team up with heroes from other worlds, including Mega Man X's time and the alternate universe of Sonic Boom. 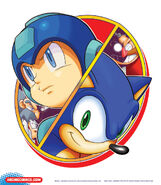 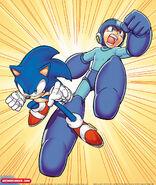 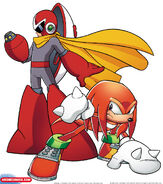 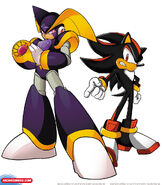 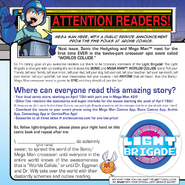