The premise had earlier been foreshadowed in the Off-Panel strip in the first issue of Sonic the Hedgehog since the Worlds Collide crossover's end, where Sonic, after returning to his story, discovers the dreary events of what was occurring, and made plans to stay at Mega Man's place for "the next crossover." The crossover was also hinted at in Mega Man issue 43, when Xander Payne, while insanely ranting about the future he saw and etching his visions onto his cell wall with a makeshift shiv, ominously states that "worlds will collide again." It was later confirmed that the Mega Man X and Sonic Boom universes would also be involved.[1]

Like in the previous crossover, the story was written by Ian Flynn and all cover artwork for the issues partaking within the crossover was drawn by Patrick "Spaz" Spaziante. According to Paul Kaminski:

"When the worlds of Sonic the Hedgehog and Mega Man collided in the pages of Archie Action comics, readers, fans and retailers made it the biggest crossover event in Archie Action history. That historic crossover storyline changed the comic book worlds of Sega and Capcom's iconic video game characters forever, but now an even bigger event is on the horizon. You saw what happened when worlds collided, now see what happens when Worlds Unite! And this time, no universe will be safe..."[3]

On December 12, 2014, a teaser poster was unveiled revealing Mega Man X and Sticks the Badger encountering each other, indicating that, in addition to the standard Mega Man and Sonic the Hedgehog/Sonic Universe series, the Sonic Boom and Mega Man X universes at least will collide with each other as well. Paul Kaminski quoted:

"Not one, but TWO new casts will be joining the battle in this summer's Sonic/Mega Man WORLDS UNITE crossover event! The worlds of Sonic Boom and Mega Man X will be joining the fray, accompanying the worlds of Sonic the Hedgehog and Mega Man in the biggest crossover event in Archie Action history! The Sonic Boom comic series is part of the latest multi-media initiative from Sega, which includes video games, toys, and an all-new TV series on Cartoon Network! Mega Man X has been a staple of video game culture for decades, and we were thrilled to begin exploring that futuristic universe in 2014's Dawn of X storyline in the Mega Man comics! How will the slapstick antics of the ever-paranoid Sticks the Badger measure up against the futuristic action of X and the Maverick Hunters? Pick up Worlds Unite, starting this spring from Archie Action, to find out! And this is only the tip of the iceberg…"[1]

In 2015, it was revealed that more universes from Capcom and Sega franchises would appear in the crossover. In large part because of this, there would also be two Battle Books in addition to the 12 main issues in Worlds Unite, to ensure all characters are used to some capacity.[4]

A promotional poster showing Mega Man, Sonic, X and Sticks with silhouettes of other major characters behind them, confirming the involvement of other Capcom and Sega franchises.

The final updated promo, adding Ryu, a Gore Magala, Vyse and Base Wing to the roster. 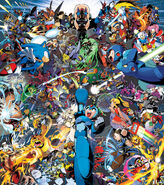 The poster variant covers together, showing Mega Man, Sonic, X, their friends and a group of Capcom and Sega all-stars, fighting against Sigma, the Deadly Six, and their army of Mavericks.