The X-Buster (エックスバスター, Ekkusu Basutā) is Mega Man X's primary weapon in all games from the Mega Man X series.

The X-Buster is a Mega Buster Mark 17[1] created by Dr. Light as part of X's body. X can transform either of his arms into this powerful buster to shoot bullets of compressed solar energy.

The X-Buster also has a Variable Weapon System that allows X to use the Special Weapons of Reploids he defeats, and it can also be powered up with different Armor Parts and Power-Up Parts. In The Day of Σ, it's shown that X can detach his buster from his forearm at will.

In Mega Man X: Command Mission, the X-Buster was redesigned alongside X's New Armor, and it is his starting weapon. Its attack is named Buster Shot, and his Action Trigger is a Charge Shot. X can equip other busters and even new versions of the X-Buster, the X-Buster MKII and X-Buster MKIII.

X's body also possesses an energy amplifier that allows him to stockpile energy in his body, before releasing it all from his X-Buster at once as a more powerful Charge Shot.

The Arm Parts obtained by X allows him to charge his buster further to use more powerful attacks. Excluding the Gaea Armor and Shadow Armor, all Arm Parts allow X to charge Special Weapons.

Appearances in other games

The X-Buster is part of X's moveset.

Near the end of the story mode, Iron Man and Thanos work together to create a weapon that has the ability to channel the power of the four Infinity Stones the heroes had. This weapon, dubbed the Infinity Buster by Iron Man, is given to X. X uses it to destroy Ultron Omega. The weapon was exceptionally powerful to such an extent that X had immense problems controlling said power even in his Ultimate form, experiencing violent convulsions while it was charging, thus requiring the heroes from both universes to lend X their energy via Doctor Strange and Morrigan as conduits to have X focus its charged energy long enough to obliterate Ultron Omega.

The X-Buster is near identical to the games, but originally it is only available in X's left arm. X can use Special Weapons by inserting chips from defeated enemy Reploids in his buster. During the battle against Sting Chameleon, his buster is severely damaged, but Armored Armadillo ordered a Metall C-15 to repair it, disobeying Sigma's orders to have an honorable one-on-one combat against X. Late in the story, X's buster is damaged again in the battle against Boomer Kuwanger in a tower, and becomes useless when he takes an energy cable from the tower and attaches it to his buster to fire a giant blast that destroyed Kuwanger and part of the tower. Without ways to attack, he's defenseless against Vile, but Zero gives his buster to X, allowing him to battle.

In the Rockman X2 manga, X gains the ability to use his buster with either arm, but he can use only one of them at a time. However, when facing the three X-Hunters in their base, he uses both busters at the same time to defeat them.

The massive power of the buster is demonstrated again in the Rockman X4 manga, where X is able to mortally wound Repliforce guerrilla commander Web Spider with a single charged shot. The force of the blast resulted in Spider's head being dis-attached from his body, with him having to hold it in one hand before losing all strength and dying seconds later. 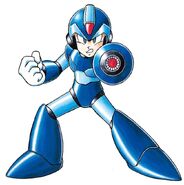 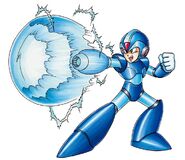 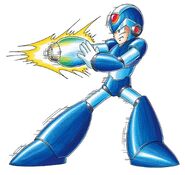 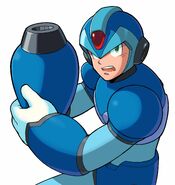 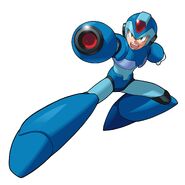 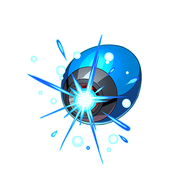 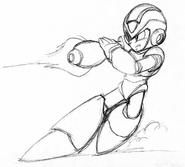 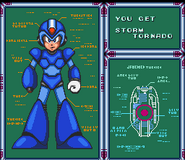 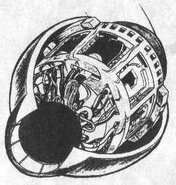 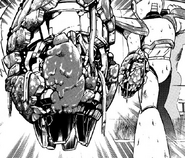 X trying to use the X-Buster in both arms (and a Buster joke by Dr. Cain) in the Rockman X2 manga.

X using both busters one after the other with the Second Armor.