MMKB
Register
Don't have an account?
Sign In
Advertisement
in: Articles with hAudio microformats, Organizations, Antagonists,
and 4 more

The X-Hunters, known as Counter Hunters (カウンターハンター, Kauntā Hantā) in Japan, is a group of three Mavericks and the main antagonists in Mega Man X2 formed to counter the Maverick Hunters. They recovered Zero's parts to revive him as a Maverick. After defeating two of the eight Maverick bosses, they will contact Hunter Base, each challenging Mega Man X to duel. They will then randomly appear in hidden rooms in one of the six remaining stages; if defeated, X will recover one of Zero's parts. They also appear as individual bosses in the final stages.

Early designs for X1 Sigma, later served as the basis for the X-Hunters in X2.[1] 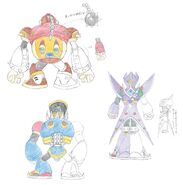 Back view of the X-Hunters.

X-Hunters in the FMV opening of Mega Man X3.

The X-Hunters in their cameo appearance in Mega Man X5.

The X-Hunters in the Rockman X2 manga.

χ -kai- is a character designed by Keisuke Mizuno, his figure was made by TruForce Collectibles for the New York Comic Con 2015 and the character was introduced as the Leader of the X-Hunters.

Developer Comments
"When figuring out the limits of the CX4, a female X-Hunter was removed from what were called the 'Four Guardians' at the time. Violen also lost his second form. We just didn't have the resources to make that all happen." -Yoshihisa Tsuda [2]

The X-Hunters reappeared as a group in the Worlds Unite crossover event, having been three of many Mavericks recreated by Sigma-1. After attacking the Sky Patrol, they and most of their comrades departed for other worlds. They briefly invaded the world of Monster Hunter, but were brought down by the inhabitants, X, and Sticks the Badger. Based on dialogue from X and the X-Hunters, their previous encounter had been enough of a challenge that X was horrified that Sigma brought them back, and that apparently, Zero had been involved somehow in stopping them.