Since X-Kai is a prototype based of the original Mega Man blueprints, he shares similarities in design with Mega Man X, although, his specifications where augmented to be even stronger than the original X.

His design, aesthetically, is similar to X's Ver.Ke design, but with different parts painted gold and black. The gem on his helmet is of a purple-ish color, his pupils are red and he has purple streaks running down from his eyes and extending down his cheeks. His soft armor is mostly grey with a few golden stripes, while his armor is mostly black, with gold and orange details. He features a Sigma symbol on his chest, with the caption "Counter Hunter" below it, and multiple Caution signs on various parts of his armor.

He has his own version of the X-Buster, being able to fire purple shots from it.

It is not known how he is personality-wise, but for what it is showcased, he is portrayed as serious and cold.

His character was conceived as a prototype made by Dr. Wily from Mega Man’s stolen blueprints, but he was discarded and forgotten pretty quickly in favor of Zero, as he was far into development with him. He would be found a century later by a 'mysterious man' and was completed with state-of-the-art technology in the midst of the formation of the X-Hunters, making him more advanced than Mega Man X. He was later assigned as leader of the X-Hunters.

This character was designed by Keisuke Mizuno, and his figure was made by TruForce Collectibles exclusively for the New York Comic Con 2015 as a special variant of Mega Man X. The concept behind his creation was that the X-Hunters were originally four members, but the fourth character was cut from the game due to ROM capacity. Mizumo stated that X-Kai was created because he was "amazed that Capcom didn't make a villain that looked exactly like Mega Man X." It could be argued that he ignored the existence of iX, due to its character obscurity. 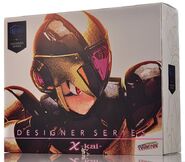 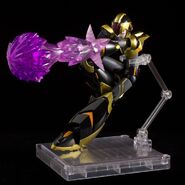 X-Kai purple effects
Add a photo to this gallery

Retrieved from "https://megaman.fandom.com/wiki/X-Kai?oldid=327771"
Community content is available under CC-BY-SA unless otherwise noted.