In addition, the mode contains a variant of the Ultimate Armor; players have the option of using X with or without it equipped. Each challenge will have nine possible special weapons from the six X titles, from which players will be able to choose three. They cannot be swapped until all three challenges are completed. X will also have use of Zero's Z-Saber much like in X6. By not selecting any special weapons before a challenge, a Buster-only mode is activated where X only has use of his X Buster (with a purple Z-Saber as a sub-weapon). In addition, this mode will also remove most of the armor, excluding the Foot Parts, leaving X with just the Air Dash and Hover abilities. The only difference between difficulty levels is the amount of damage that can be inflicted between both X and the Mavericks.

Unlike with the earlier Legacy Collections, however, players only have a limited amount of lives and start with 2 extra lives in reserve when beginning the challenge, and cannot be restored to full health between challenges. In addition, weapon energy cannot be restored as well. In Easy Mode however, defeating the first boss among the pair can earn the player a Large Energy capsule and also allows for the Weapon Energy of all weapons to be restored between challenges.

Once the player completes X Challenge, Hard Mode is unlocked. In addition Practice Mode becomes available, which allows for the player to participate in a single challenge regardless of difficulty.

Completing 9-3 on Hard Mode will grant access to level 9-4, a secret level in which the player must fight both Ultimate Armor X and Awakened Zero. As it is a secret level, there is no point system in place, and so the player does not receive a score at the end when compared to the rest. In this level, instead of getting a Game Over if the player is defeated, the game will instead skip to the credits - even though the player starts off at 100% with all lives, energy and weapon energy restored, just like a normal challenge. 9-4 is excluded from Practice Mode due to it being a secret level.

Though fighting these three consecutive battles is tough and X will only have three special weapons, the trick is to figure out which of the two bosses is the larger threat and just focus on using their weakness against them, while attacking the other one with X Buster since the Plasma Ball can help deal with inflicting minor damage and destroying minor obstacles. The Z-Saber, while effective against Zero Nightmare, should only be reserved for dealing with quick damage and minor obstacles. Occasionally special weapons may help against other bosses, such as Gravity Well against the Blaze Heatnix/Blast Hornet challenge, or grant benefits, like when using Strike Chain to deal the last hit on a boss, it will drop a large Life Energy capsule.

Also when playing on Normal or Hard Mode, if X's health is high enough after completing a challenge, it is possible to complete another challenge to help conserve remaining lives, otherwise just waste the rest of X's life energy if his health is too low to avoid wasting weapon energy.

To get the achievement/trophy "Speed of Light" from Mega Man X Legacy Collection 2 which requires the challenge to be completed in less than a minute, a great method is to go to Shield Tactics - Stage 7-1, Armored Armadillo and Rainy Turtloid's stage - and bring their weaknesses, Ice Burst and Electric Spark. Electric Spark's charged form can not only dispose of Armadillo quickly, but it also easily destroys the gems in Turtloid's shell, making him much more vulnerable to Ice Burst. However, in Easy Mode, there are more opportunities to complete this achievement due to the fact that bosses take more damage from X's special weapons. For another achievement from Mega Man X Legacy Collection 2 "Can't Hit Me", which involves completing the challenge in under 3 minutes, the trick is draw it out by leaving one boss behind whose attacks are easier to deal with such as Bubble Crab (due to being able to stay in the air above him) or Storm Eagle. For dealing with the "Elite" achievement from Mega Man X Legacy Collection, it is better to do it with Stage 1 since the bosses there are not really as difficult and it is easier to use effective strategies to beat them.

If completing the X Challenge is too difficult at higher difficulties, then it would be easier to complete the X Challenge on Easy Mode first. This way it makes easier to complete the game and also to unlock Practice Mode. Practice Mode can be used as an effective means of training, to help train players for completing challenges at higher difficulty levels with the exception of 9-4. In addition, using Easy Mode can make it more effective to collect all the Hunter Medals exclusive to X Challenge as there are no difficulty level requirements for earning them.

There are some differences in X Challenge, which was due to a number of factors that were changed (stage factors, weapon usage, boss attacks etc.) when compared to their original release. Some of these changes were made due to the SNES bosses mixed in with the PS1 bosses/gameplay features or to level the playing field for X Challenge to make it simple to avoid gaining too much of an advantage over the bosses. These changes includes:

The image rewarded for beating the X Challenge on Easy.

The image rewarded for beating the X Challenge on Normal.

The image rewarded for beating the X Challenge on Hard.
Add a photo to this gallery 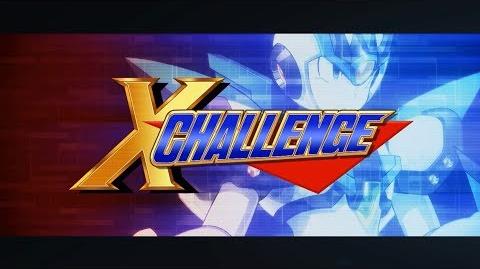 Mega Man X Legacy Collection 1 and 2 - X Challenge Trailer
The official trailer for X Challenge, featuring a rundown of some of the challenges the new mode has to offer
Add a photo to this gallery
Retrieved from "https://megaman.fandom.com/wiki/X_Challenge?oldid=331792"
Community content is available under CC-BY-SA unless otherwise noted.